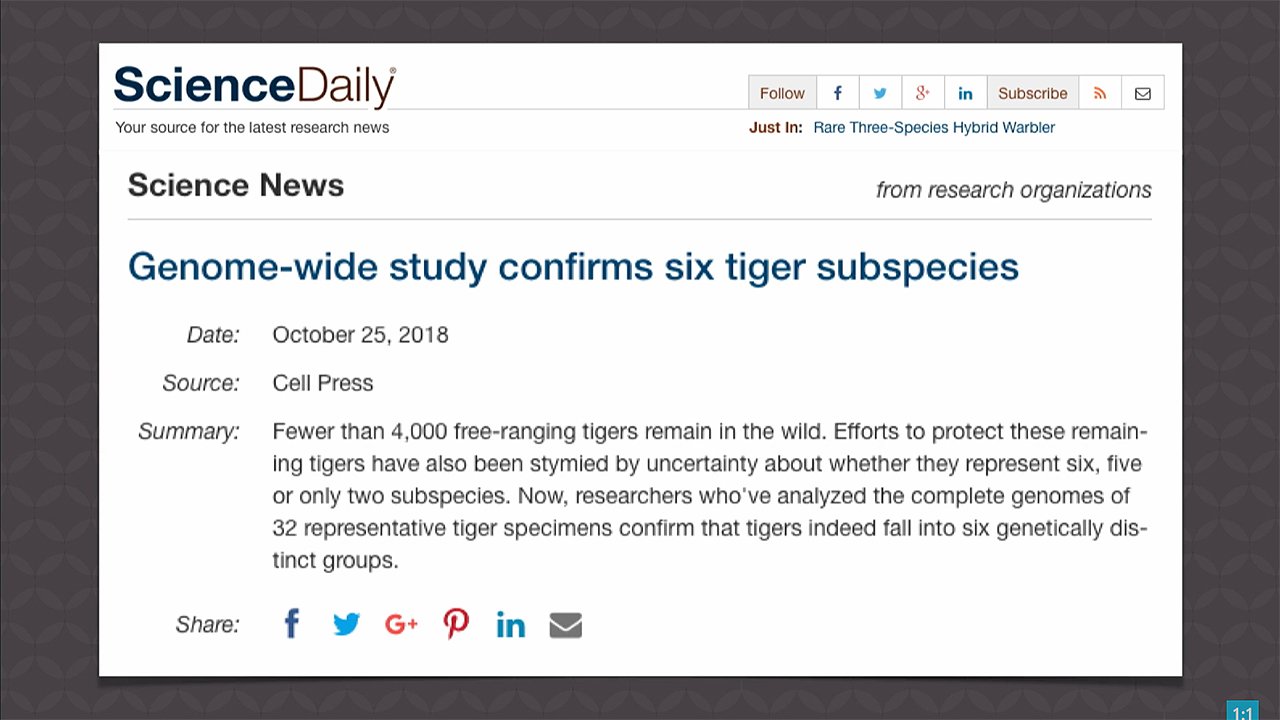 A recent study of the tiger genome confirmed that there are six extant (still in existence) subspecies of tigers; Bengal tiger, Amur tiger, South China tiger, Sumatran tiger, Indochinese tiger, and Malayan tiger. This new knowledge will aid in conservation efforts. But it also has an interesting creation connection, confirming exactly what we would expect starting with God’s Word.

AiG’s Dr. Nathaniel Jeanson, who holds a PhD in cell and developmental biology from Harvard University, wrote these comments about the study:

Evolutionists have long thought that species take hundreds of thousands to millions of years to form. In contrast, young-earth creationists believe that tens of thousands of new species formed from the “kinds” on board the Ark—and that this process took only about 4,500 years. For example, the over 5,000 mammals species alive today (e.g., elephants, giraffes, zebras, tigers) arose in just 4,500 years from less than 200 mammal “kinds” on board the Ark.

Which view is most consistent with the evidence? Young-earth creationists expect species to still be forming today—at appreciable rates. Consistent with this expectation, over 6,000 subspecies of mammals exist—more than the number of mammal species. Since subspecies are populations of creatures that are almost new species, this indicates that thousands of mammals around the globe are but one step away from becoming new species.

It’s exciting to see even more research that confirms what we would expect, starting with God’s Word.

It’s exciting to see even more research that confirms what we would expect, starting with God’s Word. This tiger research is good observational science. The evolutionary baggage is nothing more than a faulty interpretation of the evidence. But the research is actually much more consistent with a biblical view than with an evolutionary one. And this is exactly what we’d expect since God’s Word is the true account of history.

This subject is dealt with in detail in Dr. Jeanson’s recent monumental work, Replacing Dawin. I urge you all to obtain a copy.

Watch the entire episode of Answers News for November 8, 2018.