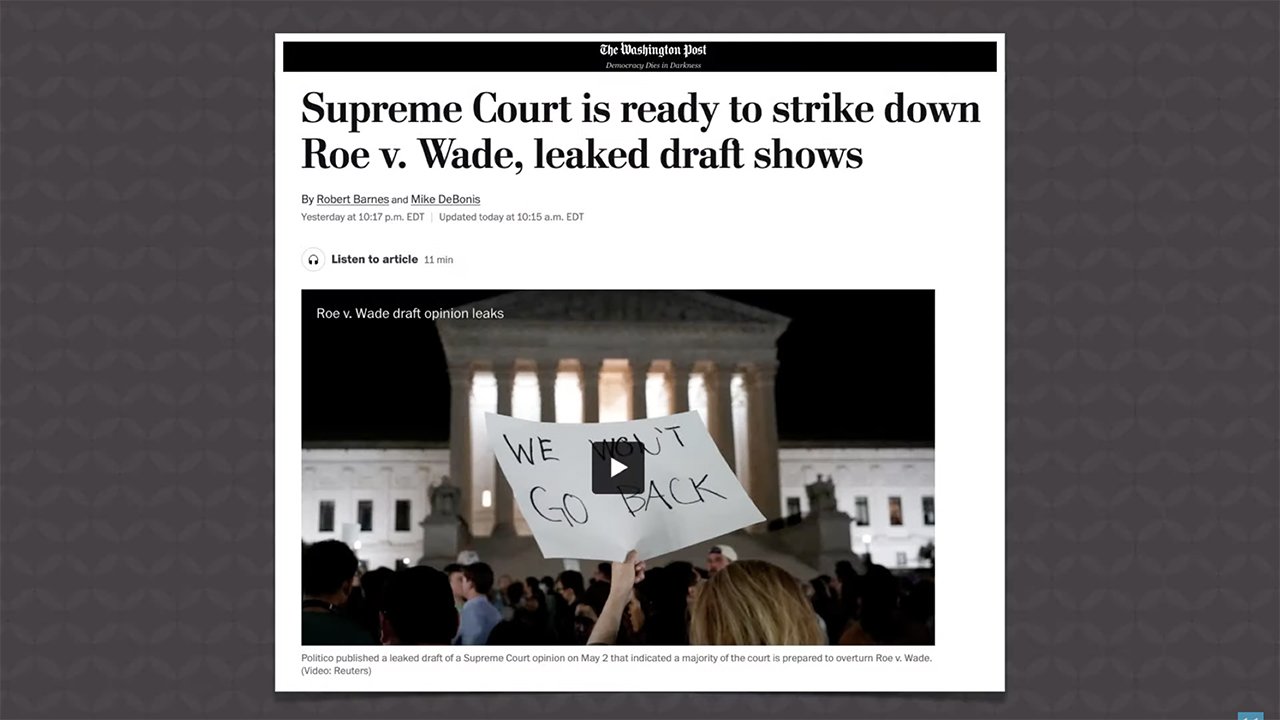 Draft opinions do not always guarantee that the proposed decision will be ruled in favor of. There is historical precedent of justices wanting revisions after reading the reasoning of a draft opinion and sometimes even of reversing their initial votes.

While we would applaud this decision and thank God for it, legislation will never cure man’s sin problem.

But if true, then the almost 50 years of allowing abortion (really child murder) to be legal in the US will end. This would be a most welcome development, but even if that does happen, a future Supreme Court could reverse the decision. While we would applaud this decision and thank God for it, legislation will never cure man’s sin problem. Only the gospel of Jesus Christ can turn hearts from stone to flesh.

And speaking of SCOTUS cases, you could say that this recent (and well-written) NY Post opinion section article was generated because of prayer. The author, Betsy McCaughey, covered the current SCOTUS case Kennedy v. Bremerton School District. In the appeal letter for that case, Joe Kennedy, who since 2008 had coached high school football for Bremerton High School in Washington state, customarily took a knee and prayed quietly (or silently) on the 50-yard line after games.

Coach Kennedy wasn’t going to hide it because he worked for the state, and complying would send a message that prayer is bad and must be hidden.

Coach Kennedy received a letter in 2015 from the school district that his prayer violated the establishment clause. The letter asked him not to pray on the playing field but instead to go across campus and pray in the janitor’s office. Coach Kennedy refused on the grounds that he was just expressing the free exercise of his religion and wasn’t going to hide it because he worked for the state, and complying would send a message that prayer is bad and must be hidden. Shortly thereafter Coach Kennedy was then placed on paid leave and not rehired when his contract expired. He has taken his case to court, and after the 9th Circuit Court of appeals upheld the school district’s decision, he appealed to the Supreme Court, which is currently hearing the case.

Part of the Bremerton School District’s defense strategy was to argue that students might feel pressured to join in the coach’s prayer because he is an authority figure or because coach Kennedy determines who starts or gets the most playing time. But the facts again seem to undermine the argument. Kennedy also coached junior-varsity football and had two players who expressed personal reluctance to pray, but both of those players became captains of the JV team.

McCaughey really hit the nail on the head, though, when she asked the following rhetorical question and then followed that up with her assessment.

Why should traditional religion be discriminated against while teachers and coaches are allowed to proselytize their woke belief system, displaying gay-pride symbols and Black Lives Matter slogans in the classroom? Are children any less at risk of coercion or indoctrination by these ideas presented by authority figures whom they’re eager to please?

The National Education Association and the American Federation of Teachers, the most powerful teachers unions, promote a curriculum that stresses transgenderism, white guilt, the 1619 Project and other progressive ideologies. But these unions want no part of traditional religion. They know religion is the kiss of death for their anti-family-values agenda.

This case is about whether a coach can freely practice his Christian religion as guaranteed by the First Amendment in the US Constitution.

Coach Kennedy was let go because the school officials believed it was possible that his actions could have been coercive, yet those same school officials have no qualms about overtly indoctrinating students in anti-biblical and harmful gender, sexuality, and social justice causes. The current SCOTUS case is not about “establishment of religion” since the Bremerton School District is already pushing its own religion of secular and sexual humanism. And as Christians, we need to understand everyone has a religion—a belief system. And that religion is either for Christ or against! This case is about whether a coach can freely practice his Christian religion as guaranteed by the First Amendment in the US Constitution.

This item was discussed today on Answers News with cohosts Dr. Georgia Purdom, Dr. Gabriela Haynes, and Tim Chaffey. Answers News is our twice-weekly news program filmed live before a studio audience and broadcast on my Facebook page and the Answers in Genesis Facebook page. We also covered the following topics:

Watch the entire episode of Answers News for May 4, 2022.