Would You Be Willing to Stand? Religious Persecution Comes to Finland

Päivi Räsänen, a Finnish Member of Parliament, was charged with three hate crimes based on her published views on sexuality—a sign of things to come in the US. 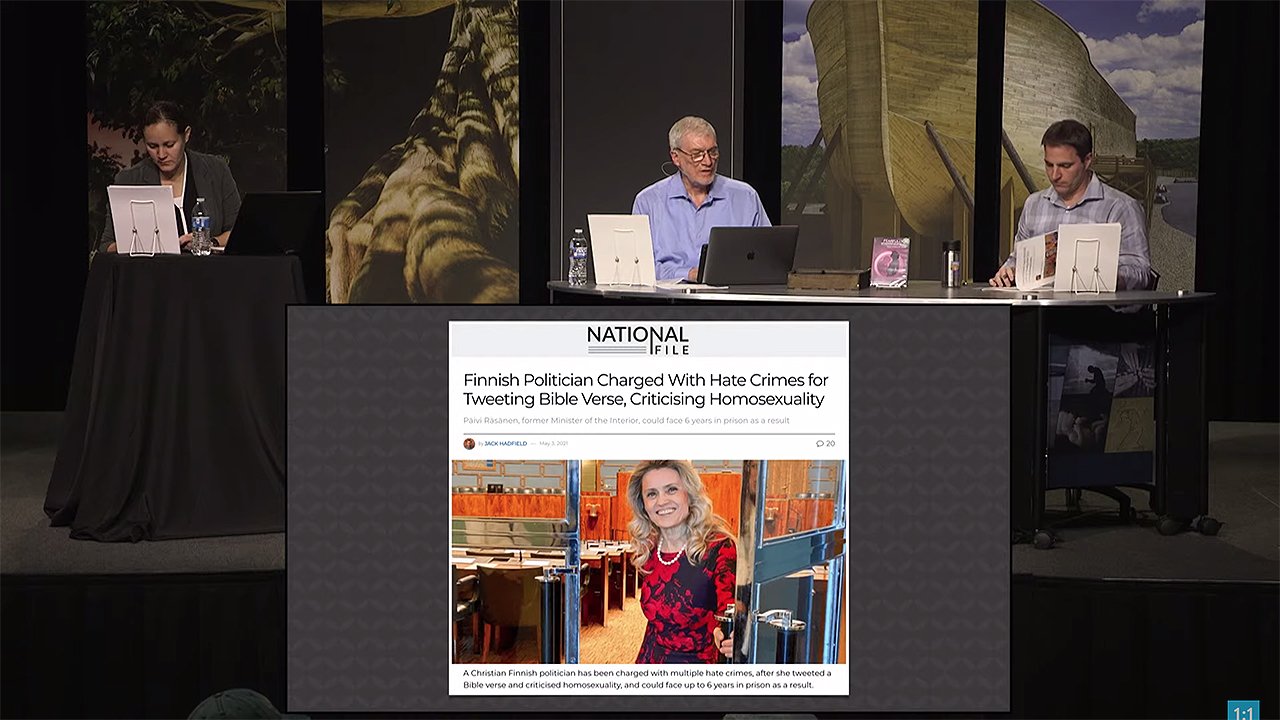 Religious persecution is already here in the West—and it’s increasing. Now, some Christians will cry “foul” on this, pointing to the much worse religious persecution currently happening in countries such as China. But intense persecution doesn’t usually begin overnight—it begins with small acts of persecution and discrimination, such as that which recently took place in Finland. Once such “doors” are opened, then they are pushed open more and more over time.

This MP is now being charged with three hate crime counts and can face up to six years in prison if convicted—for speaking the truth about homosexual behavior as the Bible clearly teaches about it.

In 2004, Member of Parliament in Finland and former Minister of the Interior Päivi Räsänen published a booklet on the Bible and sexuality. Well, over a decade later, in 2018, she spoke on a radio program about Jesus and homosexual behavior. Then, in 2019, she posted Romans 1:24–27 on social media to call out the Finnish Lutheran Church for joining an LGBT pride festival. This MP is now being charged with three hate crime counts and can face up to six years in prison if convicted—for speaking the truth about homosexual behavior as the Bible clearly teaches about it.

This is what she shared about the charges against her:

I do not consider myself guilty of threatening, slandering or insulting anyone . . .

My statements were all based on the Bible’s teachings on marriage and sexuality. I will defend my right to confess my faith, so that no one else would be deprived of their right to freedom of religion and speech. I hold on to the view that my expressions are legal and they should not be censored. I will not back down from my views. I will not be intimidated into hiding my faith. The more Christians keep silent on controversial themes, the narrower the space for freedom of speech gets.

Here’s what the Finnish Prosecutor General (who actually supports communism) said about why Räsänen is being charged:

[Räsänen’s] statements were “derogatory and discriminatory against homosexuals,” and violated “their equality and dignity,” and that as a result, her comments would “overstep the boundaries of freedom of speech and religion and are likely to fuel intolerance, contempt and hatred.”

And she’s not alone in being persecuted in Finland! Rev. Dr. Juhana Pohjola, an influential bishop in the Evangelical Lutheran Mission Diocese of Finland and the editor-in-chief who published Räsänen’s booklet, has likewise been charged with “incitement” for publishing a booklet on biblical marriage thirteen years before same-sex “marriage” was even legalized in Finland.

Rev. Pohjola said this about his charges:

As a Christian, I do not want to and cannot discriminate against or despise anyone created by God . . . Every human being, created by God and redeemed by Christ, is equally precious . . . At the same time . . . this does not remove the fact that, according to the Bible and the Christian conception of man, homosexual relations are against the will of God, and marriage is intended only between a man and a woman. This is what the Christian church has always taught and will always teach.

Rather than recanting things they wrote and published nearly two decades ago, these believers are standing firm on God’s Word as they should.

To that I say, “Amen!” Rather than recanting things they wrote and published nearly two decades ago, these believers are standing firm on God’s Word as they should. This isn’t some minor issue we can capitulate to the culture on—this is a question of the authority of God’s Word and the very gospel message. As soon as we refuse to call sin what it is—sin—we undermine the gospel. And when we reinterpret God’s clear Word about God’s design for sexuality, marriage, and gender, we undermine the authority of God’s Word.

If your beliefs and the public statements regarding sexuality and marriage you made years ago are now put on trial, would you have the courage to do what these two have done and stand firm? We must all check our hearts regarding these matters and pray that the Lord would give us the boldness and conviction to stand firm for his glory and the good of other image-bearers of God.

I discussed this item today on Answers News with cohosts Bryan Osborne and Dr. Gabriela Haynes. Answers News is our twice-weekly news program filmed live before a studio audience here at the Creation Museum and broadcast on my Facebook page and the Answers in Genesis Facebook page. We also covered the following topics:

Watch the entire episode of Answers News that aired May 10, 2021.