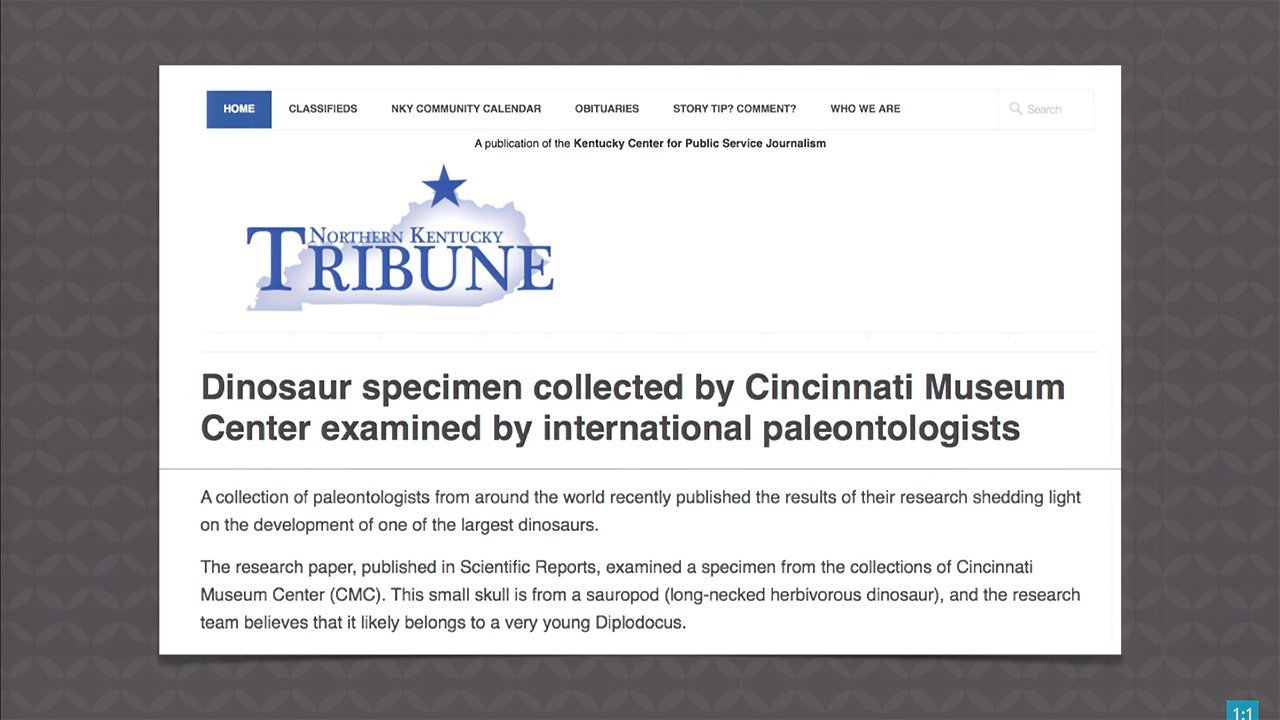 A news item from close to home (in Cincinnati, just a few miles away from the Creation Museum) caught my eye. Now, I’m used to seeing articles about recent dinosaur finds or analysis of dinosaur fossils in museum collections. But what stood out in this article was that the dinosaur in question was a juvenile sauropod.

According to the article, the dinosaur is most likely a Diplodocus, (or a closely-related sauropod), and there are only eight skulls of this dinosaur currently known, and most are from adults. This juvenile skull is approximately 10 inches (24 cm) long, making it the smallest such skull ever found. It was discovered in Montana in 2010 by Cincinnati Museum Center (CMC) paleontologist Dr. Glenn Storrs and his paleontological team.

In the journal article from which the news item was taken, the authors estimate that based on skull size, the maximum size of this juvenile (estimated to be between 2–6 years old) was 29.5 ft. (9 m), and they considered that to likely be much higher than what its true size actually was. In a 2017 paper that they cited as reference, another 6-year-old diplodocus was estimated to be less than 20 ft. long, and it had a larger skull (meaning that this particular juvenile might well be under 15 ft.—about the size of an African Elephant). Diplodocus did have a small head compared to body size, and the largest skull found measured just over 23 inches (60 cm). But considering that a fully grown adult diplodocus, one of the largest dinosaurs to have lived, could reach lengths of close to 100 ft., a 20 ft. juvenile is incredibly small in comparison.

Now why am I so interested in this particular dinosaur find? Well, we often get asked questions like, “How did Noah fit dinosaurs on the ark?” and people are surprised when we answer that even the largest dinosaurs started out small and that Noah could have likely taken juvenile (not baby!) animals onto the Ark (and God sent the animals to Noah anyway). But even so, we have been scoffed at by skeptics who imagine that even juvenile sauropods would have been impossibly large, eaten too much, and been too hard to manage. But this study on one of the potentially largest animals Noah would have taken aboard shows that this is just not the case. Assuming the smaller size of 15 ft. this juvenile dinosaur would have been smaller than most full-grown giraffes.

Rather than a fairy-tale ark with the head of the giraffe (and dinosaurs) sticking out, we have shown that the reality is vastly different.

Rather than a fairy-tale ark with the head of the giraffe (and dinosaurs) sticking out, we have shown that the reality is vastly different. There was plenty of space (and headroom) for a giraffe or a Diplodocus (even a large adult) on Noah’s ark, and the ark had more than enough space for food for all of the animals. In addition, this study also discovered that at least some juvenile sauropods had more diverse teeth (and more teeth in general) than the adults, and that they likely were able to eat a greater variety of plant material. This means that Noah would have been less likely to have to have needed specialized vegetation for these juveniles. It makes sense for the new world after the Flood that God would probably send mostly juveniles of the land animal kinds.

Isn’t this what we have said in many of our articles on this subject? And our exhibits at the Ark Encounter highlight the same thing. People have imagined all kinds of “problems” with the Ark—not enough space, no way Noah could have gathered all the specialized food needed, no way his family could have met the needs of the animals. Yet each time a news story like this comes to light, the skeptics either ignore it or don’t consider that it corroborates what little detail is given us about the ark in Scripture. God wanted Noah’s family and the ark animals to replenish the earth, and he gave Noah the knowledge and ability to do what needed to be done for his family and all the animals. Noah demonstrated his faith in God, by reverently believing God and doing what he instructed (Hebrews 11:7).

This item was discussed today on Answers News with regular cohosts Dr. Georgia Purdom and Bodie Hodge and guest Bryan Osborne, AiG’s curriculum specialist. Answers News is our twice-weekly news program filmed live before a studio audience here at the Creation Museum and broadcast on my my Facebook page and the Answers in Genesis Facebook page. We also discussed the following topics:

Watch the entire episode of Answers News for October 18, 2018.