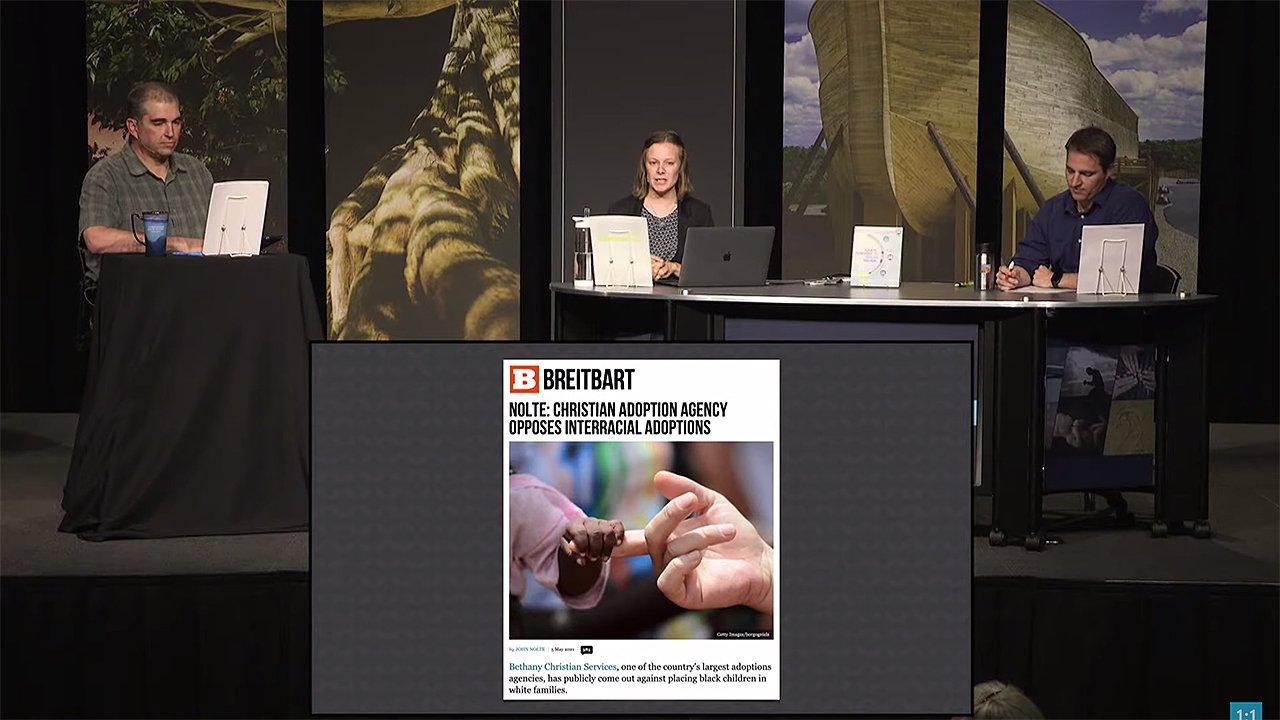 Earlier this year our Answers News team covered a story regarding Bethany Christian Services, one of the largest adoption agencies in the US. Bethany had expanded its services to include LGBTQ couples, all in the name of serving children. But that decision wasn’t really about the best welfare of children—they abandoned the authority of God’s Word regarding God’s good design for marriage and family and bowed to the cultural narrative. And they’ve done so yet again, in similarly egregious fashion.

Citing a “long journey toward becoming an anti-racist organization,” Bethany is openly advocating for racism and discrimination in adoptive families. Reportedly this agency favors “overhauling” the Multi-Ethnic Placement Act. This act “bars racial discrimination in placing a child into an adoptive family”—and they want it overturned, claiming that “allowing white families to adopt Black children from the foster care system ‘can cause a lot of harm to children of color’” and therefore “a child’s race should be considered ‘as part of the best interest determination for child placement.’”

This is the poison of so-called “anti-racism.” It sees individuals as nothing more than the shade of their skin.

This is the poison of so-called “anti-racism.” It sees individuals as nothing more than the shade of their skin. Applying “anti-racist” ideology, rooted in critical race theory, as Bethany claims they are on a “long journey” towards, means every decision must be made based on how much, or how little, melanin (brown pigment) a person possesses and how that influences their “lived experience,”—with this “lived experience” now being the ultimate arbiter of truth. Character, morality, the love of a family . . . none of that matters—only skin shade does. That’s what “anti-racism” teaches, and if Bethany is journeying down that path, that is where they will end up. Indeed they are already well on their way towards such poisonous thinking.

Think of Bethany’s argument this way: Suppose a man with a dark shade of skin marries a woman with a light shade of skin, and they have children. By our culture’s very arbitrary standard, those children are considered “children of color”—is the mother not a suitable parent to the children because she has a different shade of skin than the children? How ludicrous!

And yet Bethany is making the same basic argument—a light-skinned father or mother may not be in the “best interest” of the child when it comes to adoption, so why should a child by birth be any different in this evil view? Is Bethany hoping we will revert back to the days when so-called “interracial marriages” were illegal because having a light-skinned parent can “cause a lot of harm to children of color”? I sincerely hope Bethany would not want to overturn the 1967 US Supreme Court decision that made so-called “interracial marriage” legal, but it’s where their argument logically goes . . . right back to the days of segregation, discrimination, prejudice, and racism. It’s disgusting and has absolutely no place in a “Christian” organization!

Who Is a “Person of Color”?

Furthermore, how does one decide who is a “person of color” and who is not? How much melanin makes someone “a person of color”? How many dark-skinned ancestors must someone have—and how recently—to be “black” and not “white”? It’s utterly arbitrary and inherently racist to classify people—who, biologically, genetically, and, most importantly, biblically, are all one race—into groups based simply on their skin shade. Skin shade is a fractionally small part of the created diversity in our DNA.

As Christians, we must reject the world’s “answers” to a spiritual problem (racism) and instead start with God’s Word.

Anti-racism is foolishness and, frankly, evil because it’s grounded in man’s sinful heart and an obsession on outward appearance and subjective (and highly varying) “lived experience,” not on the truth of God’s Word. As Christians, we must reject the world’s “answers” to a spiritual problem (racism) and instead start with God’s Word. It’s the history in God’s Word that makes sense of the world around us, including the question of so-called “race” and racism.

The Bible clearly teaches we’re all one race (Acts 17:26), descended from the first human couple, Adam and Eve. There’s no such thing as “interracial marriage” or “interracial adoption”—all belong to the same biological race, Adam’s race.

As Christians, part of our calling is given in James 1:27:

Religion that is pure and undefiled before God the Father is this: to visit orphans and widows in their affliction, and to keep oneself unstained from the world.

We’re to care for orphans—and not just if we share the same skin shade. Bethany Christian Services: stop taking your cues from the world and turn to the Word. It’s the ultimate standard for truth, and it says we’re one race—and puts no qualifiers on which families can obey God’s command to care for orphans by welcoming them into their homes.

This item was discussed yesterday on Answers News with cohosts Avery Foley, Roger Patterson, and Bryan Osborne. Answers News is our twice-weekly news program filmed live before a studio audience here at the Creation Museum and broadcast on my Facebook page and the Answers in Genesis Facebook page. We also covered the following topics:

Watch the entire episode of Answers News that aired May 12, 2021.