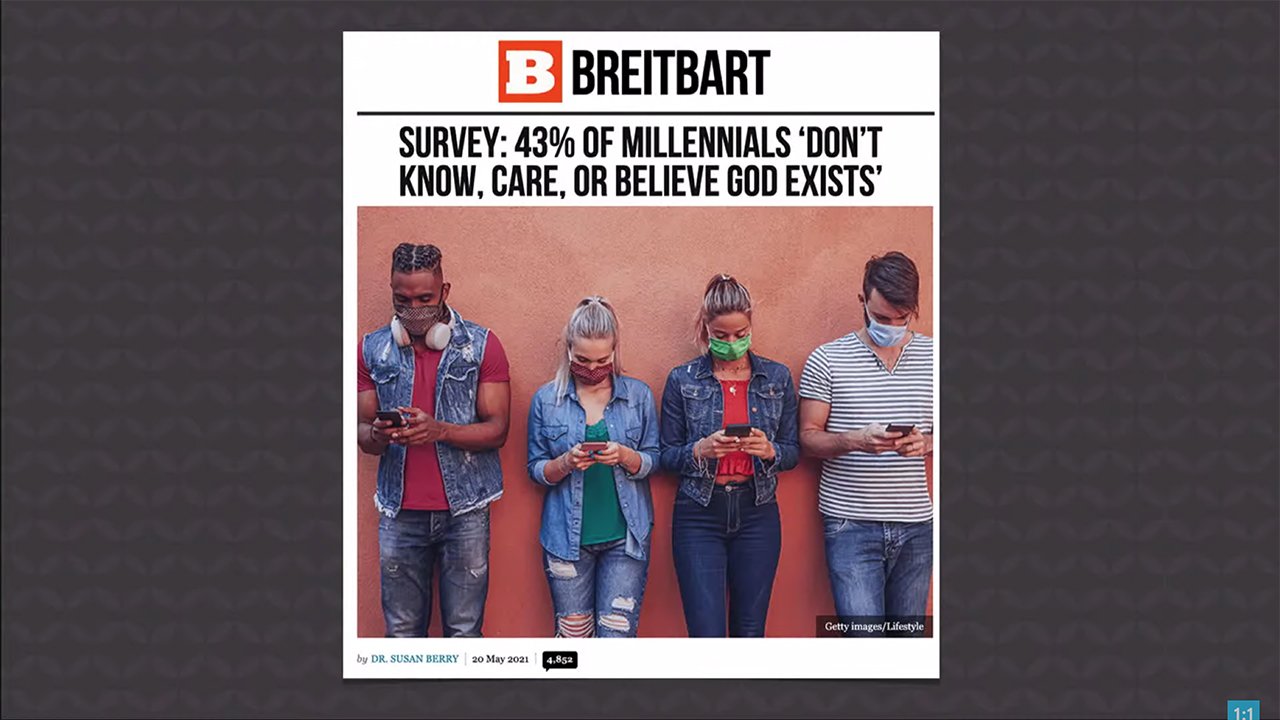 A massive generational change has occurred in America, and we’re feeling the effects of this upheaval. I’ve been warning that this is coming for decades, and it’s certainly here (and with no sign it’s slowing down!). What do I mean? Well, consider the results of the American Worldview Inventory 2021, a survey conducted by the Cultural Research Center at Arizona Christian University—it perfectly highlights this sad generational shift.

Belief in God Just Gets a Shrug

All of these beliefs are in sharp contrast to those held by previous generations.

According to this new survey, a shocking 43% of American Millennials (identified in this survey as those born between 1984–2002) “don’t know, care, or believe God exists.” Less than half (48%) hold to the “Golden Rule” of “treat others as you want them to treat you,” while nearly 4 in 10 (38%) give the green light to revenge, saying “you try to get even with people who have wronged you.” Many Millennials believe “an abortion performed to reduce personal economic or emotional discomfort” and “premarital sex with someone expected to be their future spouse” are “morally acceptable.” All of these beliefs are in sharp contrast to those held by previous generations.

Syncretism and Moral Therapeutic Deism—the Way of the Young Folks

That certainly sounds like what the majority of people in the US believe today (particularly the younger generations). As the study mentioned above found,

Millennials are “far more likely” than other generations to:

It’s all about being “happy” and feeling good—there’s no room for sin, God’s wrath, biblical justice, absolutes, personal responsibility, self-sacrifice, tolerance for others (love for enemies), or uncompromising biblical truth in a worldview that’s all about me, what I think, and what makes me feel good in the here and now.

A Religion of Sand

Such a worldview may borrow morality, or other truths like the existence of God, from the Bible, but it is distinctly un-Christian.

In other words, as I’ve said many times before, these younger generations aren’t irreligious or neutral about worldviews. They have a religion—it’s a religion of their own making as they act as their own gods. It’s man’s word as the authority. It’s secularism, where man is the authority and decides truth. Such a worldview may borrow morality, or other truths like the existence of God, from the Bible, but it is distinctly un-Christian. It’s based on the sand of man’s opinion, grabbing elements from a variety of different “religious traditions,” not on the unchanging rock of God’s Word.

This worldview is radically changing the West because ideas have consequences. And ideas based in sinful, fallible man’s opinions will have deadly consequences. History bears that out and modern generations won’t be an exception.

What Should We Do?

So, what’s the church to do in light of the seismic shift in the culture? Well, what the true church has always done throughout history: believe and obey God’s Word, preach the gospel, and refuse to water down truth to accommodate a dark world that hates the light of Christ. How can we do that? Well, it starts with each individual Christian committing to knowing, believing, defending, and proclaiming God’s Word. And then teaching others to do the same. We must:

It’s the Word of God that anchors us to truth, no matter the generation or what’s currently rocking this broken world. Let us remain steadfast, holding to Christ and his Word, and boldly sharing the gospel and biblical truth with a world that desperately needs to let go of its false ideologies and turn to the only true foundation that will last the test of time: the very Word of God.

This item was discussed yesterday on Answers News with cohosts Bryan Osborne, Bodie Hodge, and Roger Patterson. Answers News is our twice-weekly news program filmed live before a studio audience here at the Creation Museum and broadcast on my Facebook page and the Answers in Genesis Facebook page. We also covered the following topics:

Watch the entire episode of Answers News for June 2, 2021.