I was recently at the Ashmolean Museum of Art and History in Oxford, which had a copy of the Sumerian King List (on a clay prism) that spoke of a flood in the region of Mesopotamia. Part of the museum’s commentary about the King List states,

This is the first side of the Sumerian King List, written in around 1800 BC. It mentions a legendary flood in Mesopotamia. Multiple or single flood events in prehistory may have inspired this story, in turn inspiring the Biblical Flood story in the book of Genesis. 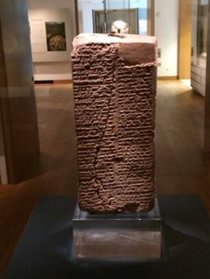 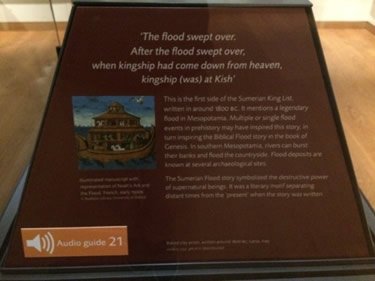 Of course it is popular for many people to think that the Genesis Flood account is just another myth from the ancient world. Many scholars today accept that the biblical account is borrowed from other ancient Near Eastern (ANE) accounts (as above). They accept this, believing that these other accounts pre-date Genesis , which brings the Bible’s authority into question.

However, has borrowing taken place?

The argument that similarities indicate borrowing is based on the common fallacy that if B resembles A, therefore B has borrowed from A. The dependency fallacy occurs when scholars believe that the Genesis account was borrowed from or was dependent upon the ANE accounts. This fallacy has dominated comparative mythology and religion studies for many years. The fact that two documents have similarities does not mean that the younger is dependent on the older. There are other explanations; for example, they could have come from a common text or a common universal memory.

How then should we understand the common elements between the accounts? Well, if a flood truly occurred in antiquity, one should not be surprised to find some reference to it in and throughout ANE literature. The similarities may reveal that the different accounts are explanations of the same event. Since the events of Creation, the Flood and the dispersion at Babel occurred in history, we should not be surprised to find some reference to these in and throughout the ANE. It is reasonable to assume that the Flood account in Genesis 6–9 is the original version that the pagan writers vulgarised for their own purposes. Because of the fallen nature of humanity, it is understandable why the ANE texts are corrupted and distorted (Romans 1:18–32). This does not mean that the ANE myths are untrue but rather that they make false statements; whereas the Scriptures give a true historical account of the event through the inspiration of the Holy Spirit (2 Peter 1:21). The similarities then are different accounts and explanations of the same event.

The many differences between ANE accounts and the Flood narrative make them stand apart in significant ways.

However, it is also important to point out that while there are many similarities and parallels between the accounts there are also major differences. The significant differences between Genesis and the ANE accounts of the Flood should lead us to conclude that Genesis is not dependent on them. Many scholars put a lot of emphasis on the similarities between the accounts; however, in doing this, they often minimize the differences. The many differences between ANE accounts and the Flood narrative make them stand apart in significant ways. Some of these are:

These differences show that the unique biblical account is in no way dependent on the other ANE accounts.

These ANE accounts of the Flood from pagan, idolatrous nations are distorted versions of the truth. Genesis is not a modified version of pagan myths. There is no biblical evidence that God ever uses myths as a basis for teaching truth. On the contrary, Scripture clearly distinguishes truth from myth (2 Timothy 4:4; 1 Timothy 1:4; Titus 1:14; 2 Peter 1:16).

Previous Article Pastor Silenced for Speaking Against Evolution in Methodist Synod Next Article “Resurrection Did Not Happen, Say Quarter of Christians”