A Classic Volume Revisited for a New Generation

A book I obtained from a small Christian bookstore during my final year of university studies in 1974 gave me biblical and scientific answers to those who attacked the record of the global flood in Genesis. It was one of the first books we sold in the ministry that began in our home in Australia in 1977 that eventually became the Answers in Genesis organization, and now impacting tens of millions of people a year around the world. It was one of the books I showed my father, and he was so thrilled to see answers to the objections so many people in the church raised against taking the flood account literally. What book was this?

It was The Genesis Flood, of course, written by creation pioneers Dr. Henry Morris and Dr. John Whitcomb. This book has been significantly used by the Lord as part of the foundation of the modern biblical creation movement (a worldwide movement impacting millions with the message of biblical authority and the gospel). 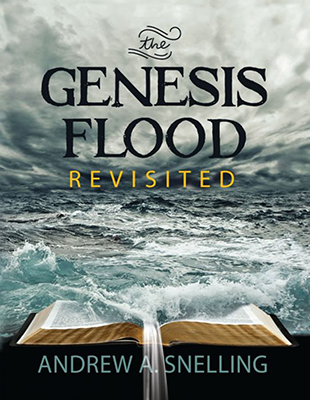 Now, this ground-breaking work was published in 1961, and we’ve learned a lot in the 60+ years since then—and that’s where The Genesis Flood Revisited comes in. Building on that classic volume with new insights from decades of work by the author, Dr. Andrew Snelling (one of the leading creation geologists in the world), and numerous colleagues, The Genesis Flood Revisited is a classic biblical and scientific defense of the truth of God’s Word in Genesis—revisited! Whether or not you’ve ever read The Genesis Flood, you’ll love the depth found in this 672-page, semi-technical work.

In this exciting volume you’ll:

Dr. Snelling’s work demolishes radiometric dating, the icon of the millions-of-years dogma, and builds a thoroughly powerful case for a young earth that explains many geological features such as varves, evaporites, coal, oil, chalk, granites, and more that biblical skeptics have used to scoff at God’s Word.

I pray The Genesis Flood Revisited will impact many people, including students like I was back in the 1970s, encouraging them to trust God’s Word from the very first verse. You can find The Genesis Flood Revisited—at a special introductory price—on AnswersBookstore.com. This is the most detailed, up-to-date creationist geological work in the world.

Previous Article What Are Your Children Learning in School? Next Article It’s Unboxing Time! See Everything That Comes with Keepers of the Kingdom