Get Answers: How Do We Know the Bible Is True?

How do we know the Bible is true? Well, ultimately, we know it must be true because it claims to be the Word of God (2 Timothy 3:16) and God cannot lie (Titus 1:2). But Christians don’t have a blind faith in the Bible and its teachings (atheists have a blind faith that life arose by natural processes, which goes against observational science). There’s evidence that confirms the Bible’s claim that it is indeed the revealed Word of God and true in all it says.

Here are just three separate lines of evidence that confirm what the Bible teaches about itself: 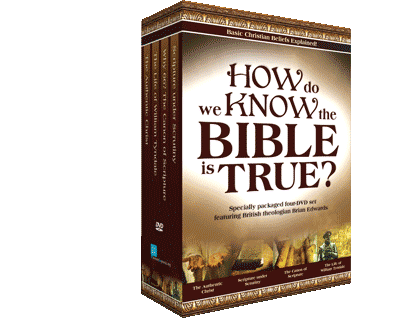 Featuring British theologian Brian Edwards, How Do We Know the Bible Is True is an essential primer of basic Christianity and apologetics that every believer should know.

The reliability of Scripture and how we ended up with the 66 books that make up our Bible are fascinating topics to explore in more depth. And Dr. Brian Edwards, a British theologian, does an incredible job presenting on this in his DVD series How Do We Know the Bible is True? This four-part series looks at the uniqueness of the Bible, how we can be confident we have all the right books—no more, no less—in the Bible, how we got our English Bible, and the historicity of Jesus. I encourage you to check it out in our online store.

This Video and Much More Available on PureFlix.com

This series is also featured on the leading faith and family video streaming service PureFlix.com. Eventually all of our videos (that’s more than 500!) will be featured on the Answers in Genesis channel on PureFlix.com at no additional cost to subscribers, allowing even more people to view our excellent content. For the cost of one DVD a month you can have access to all of our faith-building content (plus all the other content on PureFlix.com)!