Did you know that all around the world there are over 300 different legends that testify to the exact same historical event? Though each story is somewhat different in varying ways, the basic memory of the event is the same, and even some of the minor details are the same. Even better, we have the original, inerrant source to compare these various stories to. Have you figured out which historical event I’m referring to yet?

I’m referring to the global Flood of Noah’s day. The memory of this event lives on in cultures around the world, but the true account that is perfect in all the details can be found in God’s Word (Genesis 6–9). So why do hundreds of different cultures all contain legends of a great Flood?

Well, only eight people—Noah’s family—were saved aboard the Ark. All of us are descended from these eight people. After the Flood, God commanded Noah and his family to multiply and spread out and fill the earth. But eventually Noah’s descendants decided they didn’t want to obey this command, so they stayed together and built a city and a tower. God confused their languages, forcing them to spread out and fill the earth.

It’s no surprise that most of these cultures have stories of a massive Flood.

These newly created language families became isolated from one another, and soon new cultures and people groups developed. But these cultures and groups can trace their ancestry back to Noah and his family, so it’s no surprise that most of these cultures have stories of a massive Flood (and that some even remember creation and the division of the languages).

Here are just three examples of these Flood legends, excerpted from A Flood of Evidence which I wrote with my son-in-law Bodie Hodge. See if any of the details are familiar to you or your children (consider reading Genesis 6–9 before or after you read these legends to see if you missed any similarities).*

Aztec Legend of the Flood

A man named Tapi lived a long time ago. Tapi was a very pious man. The creator told Tapi to build a boat that he would live in. He was told that he should take his wife, a pair of every animal that was alive into this boat. Naturally everyone thought that he was crazy. Then the rain started and the flood came. The men and animals tried to climb the mountains but the mountains became flooded as well. Finally the rain ended. Tapi decided that the water had dried up when he let a dove loose that did not return.

Hawaiian Legend of the Flood

Hawaiians have a flood story that tells of a time when, long after the death of the first man, the world became a wicked, terrible place. Only one good man was left, and his name was Nu-u. He made a great canoe with a house on it and filled it with animals. In this story, the waters came up over all the earth and killed all the people; only Nu-u and his family were saved.

Chinese Legend of the Flood

Another flood story is from China. It records that Fuhi, his wife, three sons, and three daughters escaped a great flood and were the only people alive on earth. After the great flood, they repopulated the world.

These legends, just a small sampling of the many hundreds which have been documented, have glaring similarities with the true account of the Flood recorded in God’s Word. As we would expect since the Flood impacted all of humanity, the memory of this event is preserved in oral traditions in diverse cultures. The original account is in the Bible, and the various legends in cultures around the world are changed versions of the original but with enough of the original elements to recognize they’re all referring to this global event that occurred some 4,300 years ago.

A Flood of Evidence 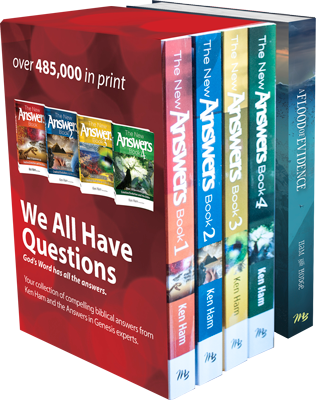 You can learn more about Flood legends and get answers to all your questions about the Ark, the Flood, the animals, and more in A Flood of Evidence. I consider this book—which contains answers to 40 Flood-related questions—the unofficial fifth Answers book. The Answers books are our best-selling creation apologetics books and are packed full of answers to the common questions of our day. We even have a special discount where you can buy all four New Answers Books and A Flood of Evidence together as a pack.

Learn more and order your copy of A Flood of Evidence today from our online store.