On the first deck of the life-size Ark at the Ark Encounter in Northern Kentucky, you’ll pass row after row of animal cages and provisions. In this large scene, the Ark is loaded, and thunder and lightning rumble in the background—the Flood is about to begin! This first deck really sets the mood for your tour, taking you back in time to what it might have been like waiting on the Ark for the floodwaters to arrive.

One of the first exhibits in the Ark depicts Noah leading his family in prayer as the storm begins. Noah is described in Genesis 6:9 as a just man—a man who was “blameless in his generation” and a man who walked with God and “found grace in the eyes of the Lord” (verse 8). Contrast this with God’s description of the pre-Flood world: “every intent of the thoughts of [mankind’s] heart was only evil continually” (verse 5). 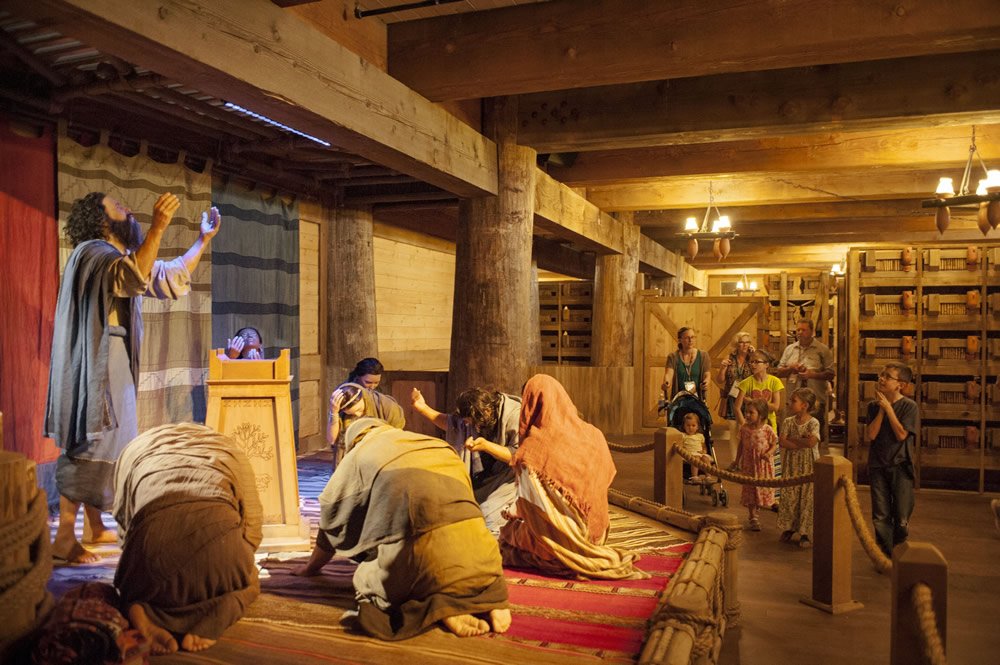 What a testimony it is that this godly man—in the midst of such wickedness—was able to lead his family to follow the Lord. Noah led his wife, his sons, and his son’s wives through the one door of salvation.

So Noah, with his sons, his wife, and his sons’ wives, went into the ark because of the waters of the flood. (Genesis 7:7)

It is consistent with the character of Noah that, at the beginning of the Deluge, he would lead his family in prayer, seeking God’s protection, provision, and the fulfillment of His plan. That’s why we chose to depict him and his family praying as they waited for the Flood to come.

May we, like Noah, walk with God (Genesis 6:9), lead our families in the truth, and constantly seek His face.

To see how you can experience this exhibit and the three decks of other world-class exhibits, visit ArkEncounter.com.