Peek Inside One of the World’s Most Complete Allosaurus Skulls

About a year ago, we took Ebenezer, our Allosaurus—or at least its skull—on a trip to Cincinnati, Ohio, for a CT (computer tomography) scan at 3D Engineering Solutions. Now, we are getting a first look inside the brain cavity of one of the largest and most complete Allosaurus skulls in the world. And you can be a part of it!

On my Facebook page, we will be filming a Facebook Live video around 10:30 a.m. on Tuesday, November 15, at 3D Engineering Solutions. We’ll look at the x-ray equipment used to scan the skull (one of only five such large machines in the country), interview the technicians who conducted the scan, and see what they discovered.

Ebenezer’s entire skeleton is more complete than most dinosaur skeletons found. It’s rare to find a dinosaur skeleton more than 50% complete, but Ebenezer’s was 56% intact with 139 bones recovered from the possible 250. However, the most remarkable feature is its 97% complete skull with 53 large teeth and the hyoid bones still intact. The hyoid bones are delicate bones, which anchor the muscle of the tongue and larynx and help with swallowing and vocalization. They are almost never intact in fossils. 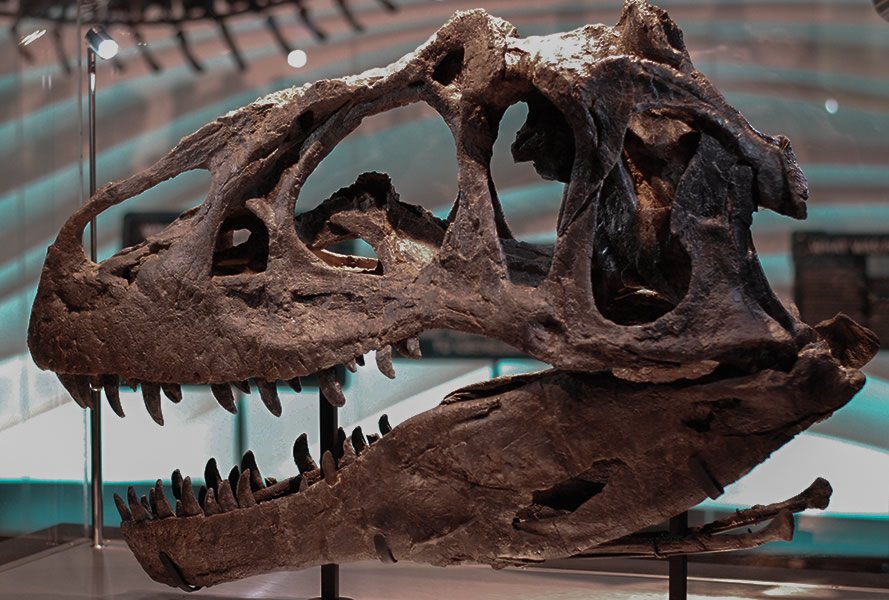 We want to make this CT scan of the skull available for other researchers to also study, so comparisons can be made to other specimens of this species. Such research may someday tell us whether Ebenezer was a male or female, and we might discover all sorts of new and interesting details about this amazing dinosaur species. But whatever else we might learn, we already know that this was a magnificent creature buried during the global Flood cataclysm and that its kind was created on Day Six of Creation Week. We’re thankful that the Lord has blessed us with this fossil to help us defend the book of Genesis and expose the scientific problems with evolution and the claimed millions of years.

Don’t forget to join us on Facebook on November 15 to take a peek inside the skull of one of the most complete Allosaurus fossils in the world!

Facing the Allosaurus at the Creation Museum

Learn more about Ebenezer and see the skeleton in our “Facing the Allosaurus” exhibit at the Creation Museum. And check out our other excellent dinosaur-related exhibits, including dinosaur eggs and bones and realistic animatronic models.

Previous Article Part of the Big Picture in a Shoebox-Sized Way Next Article What “Race” Are You?