Recently, I walked with Bill Nye “the Science Guy” through the three decks of our life-size Ark in Northern Kentucky. It turned out to be our second debate; the first one was 2014 in the Creation Museum. This latest debate lasted about two hours. (For the background, see “Bill Nye Visits the Ark Encounter.”) 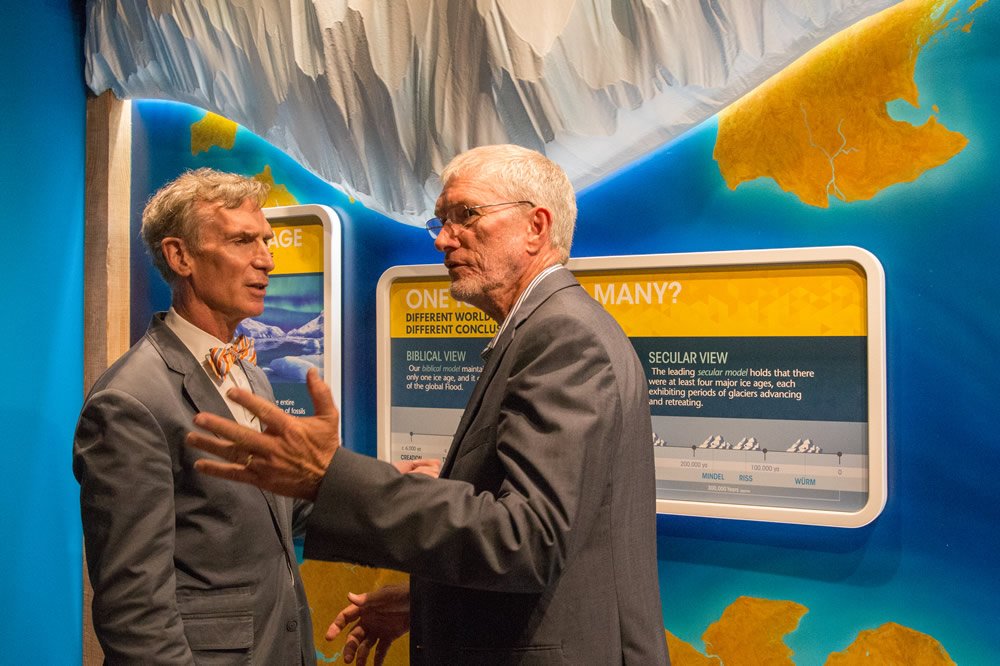 After his Ark tour, Bill made many public statements about his visit. He reportedly said that the Ark was “much more troubling or disturbing than I thought it would be.” NBC News reported, “Nye said the exhibit encourages visitors to trust faith over science and thereby undercuts their ability to engage in critical thinking.”

But here’s what is really disturbing and troubling. Nye wants to convince all children to believe that they are just animals who arose by natural processes—and that there’s no God! The implications of this belief on the question of the meaning and purpose of life are beyond serious!

Nye, who claims creationists are undercutting people’s “ability to engage in critical thinking,” wants to stop all children from being able to think critically about science.

Nye also claims that the exhibits inside the Ark encourage visitors to “trust faith over science.” Actually, our exhibits show quite conclusively that observational science in the fields of geology, genetics, and anthropology confirm biblical history concerning man, animals, and the Flood of Noah’s day. In reality, it’s Bill Nye who has the blind faith to believe that somehow life arose by natural processes. And his evidence? That DNA, including its information and language system, arising by natural processes, came about to the fact that “we’re here.” And Nye, who claims creationists are undercutting people’s “ability to engage in critical thinking,” wants to stop all children from being able to think critically about science. Instead, we are just to accept his word and his religion that life arose by natural processes. And Nye calls this “science!”

And then Bill Nye has the gall to speak negatively about the parents of a girl who challenged him, saying, "The parents were feeding her word for word." You see, Bill Nye doesn’t want parents to be allowed to teach their children about God. He wants to brainwash kids, to indoctrinate them in his naturalistic (atheistic) religion of meaninglessness and hopelessness.

We will be releasing various video excerpts of our two-hour “debate” inside the Ark and then eventually the entire two hours of video.

KH: Can you testify to how information [in DNA that is the building block for life] arose by natural processes?

The quotations from NBC News can be found in this article.

On the third deck [of the ark], every single science exhibit is absolutely wrong. . . . Not just misleading, but wrong.

This quote just goes to illustrate how irrational Nye can be when he makes many of his statements. Yes, Ark exhibits do have signs on them offering interpretations based on a biblical worldview, and understandably Bill Nye disagrees with them. But there’s a lot of information presenting facts from geology, genetics, anthropology, and so on that everyone agrees with, as we observe such things in the present. Mr. Nye can disagree with our biblical worldview, but to claim “every single science exhibit is absolutely wrong” is just plain silly.

Stay tuned! There’s much more to come about this two-hour “debate.”