Here in America we live in what I call a culture of death. This is most clearly seen in regards to abortion. Since the tragic Roe v. Wade decision of 1973, an almost incomprehensible number of babies (estimated at 58 million) have been murdered at the hand of abortion doctors. As if abortion on demand wasn’t enough, the State of Illinois has just passed a bill forcing every doctor, pharmacist, and pregnancy center to promote abortion—even if they disagree with it! So much for the free exercise of religion guaranteed by the First Amendment!

Illinois Government: You Must Promote Abortion

This bill, which has made it all the way to the governor’s desk, would bring changes to the state’s Health Care Right of Conscience Act. This legislation, if signed by the governor, would require pro-life medical providers—including non-profit groups that provide services such as free ultrasounds—who choose not to perform abortions (or provide prescriptions for certain types of birth control) to either “‘refer’ . . . [or] ‘transfer’ the patient to another provider, or provide a list of ‘other health care providers who they reasonably believe may offer the heath care service.” It would also force them to “to counsel [their clients] on the ‘benefits’ of abortion.”

It’s ironic that there’s no requirement for those who support abortion to counsel their clients on life-affirming alternatives to abortion such as parenting or adoption. Nor is there a requirement for those who are pro-abortion to refer clients to individuals who will help support them in choosing one of these alternatives! Pro-abortion groups are freely allowed to promote what they value, but pro-life groups and individuals are not given the same freedom. It’s really a reflection of what is happening in other cultural war areas such as the LBGTQ movement. More and more we are seeing secularists not just wanting freedom for their beliefs, but wanting to impose their beliefs on everyone else.

Essentially Illinois is trying to force pro-life individuals and groups to participate in abortion. The president of Heartbeat International says of this legislation, “We’re seeing a renewed sense of vigor and vitriol directed at life-affirming professionals, practices and pregnancy centers. . . . No woman should ever be compelled by her state to consider abortion as her only option in an unexpected pregnancy, and that is exactly who will suffer because of this legislation.”

Here in America we’re seeing the increasing loss of Christian freedoms. The values of the secularized culture are being forced on Christians, and we’re being told to participate or else. The First Amendment, which guarantees freedom of religion and conscience, is being tossed aside. Essentially the government is forcing its religious beliefs on Christians!

Only the gospel of Jesus Christ can change hearts and minds and, by extension, the culture.

We need to boldly stand on the authority of God’s Word and unashamedly preach the gospel. Although we certainly should fight unbiblical legislation, we won’t change the culture simply through new legislation—only the gospel of Jesus Christ can change hearts and minds and, by extension, the culture. Are you sharing Christ’s love and salvation with your family, friends, neighbors, and coworkers?

You can sign a petition to ask the governor to stop this legislation, or contact the governor and express your concerns, through the Illinois Right to Life site.

No Choice but Pro-Life Event 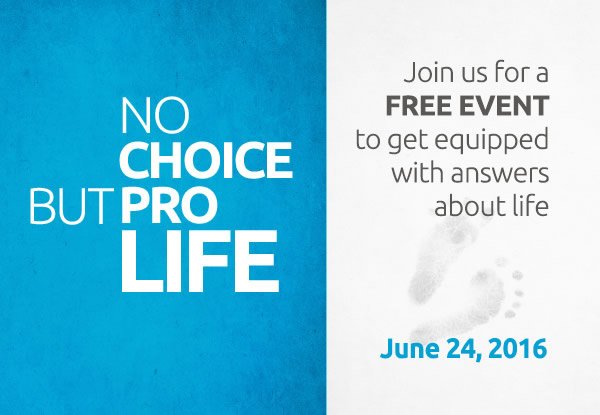 Fighting abortion through legislation is increasingly being met with limited success (though we praise God for the success that we do see). We need to fight abortion through changing the heart of the culture on this important issue.

Get equipped to fight abortion through heart change at our upcoming special event No Choice But Pro Life. This free seminar, being held here at the Creation Museum on June 24 at 6:45 p.m., will equip you to give solid biblical and scientific answers about when life begins. You will hear from Dr. Tommy Mitchell, a member of our research staff and a medical doctor; Ty Benbow, author of I’m Not Real; and me. You don’t want to miss this free event! We hope to see you there.

Previous Article Evidence of a Catastrophic Flood in Antarctica? Next Article A Call to Battle, a Call to Prayer