Today is Sanctity of Life Sunday in America, a day set aside to emphasize the sanctity of every human life. In our culture we need this message more than ever. Every day in the United States thousands of babies are killed (really murdered) in their mothers’ wombs at the hands of abortion doctors. Euthanasia and assisted suicide are also realities. Embryonic stem cell research claims the lives of thousands of tiny babies every day. Mass shootings frequently shock America. Young men and women and even children are trafficked every day in the illegal sex trade. Our culture increasingly doesn’t value human life and it will only get worse as America continues to turn away from God and His Word. In many ways, Romans chapter 1 is a picture of what our Western world is becoming. 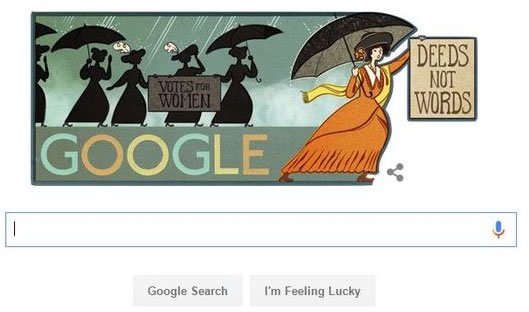 She fought diligently for women’s right to vote, even willing to be thrown in prison. Eventually her actions helped bring about the 19th Amendment to the US Constitution, which allows women to vote. Not only am I thankful for her efforts that helped women achieve equality in our democracy, I’m also thankful that, like many of the early leaders of the women's movement, Alice Paul was against abortion. She referred to abortion as “the ultimate exploitation of women.”

It’s interesting that Google, which routinely honors those who espouse secular values and beliefs, chose to honor a pro-life leader in American history. By honoring Alice Paul they are honoring someone who stood against one of the things our modern American culture values—though they likely didn’t mean to! Google’s “doodle” is a rare example of a pro-life person being honored, intentionally or not. Our culture tends to honor those who hold secular values not those who honor life.

As Christians we need to tell others why human life—every human life—is valuable, starting with God’s Word. A life isn’t intrinsically valuable because he or she can contribute to society; it has intrinsic value because every human being is made in God’s image (Genesis 1:27), and is a being who will live forever. The Psalms remind us that “I am fearfully and wonderfully made” (Psalm 139:14) and Jeremiah says that “before I formed you in the womb I knew you” (Jeremiah 1:5). When we start our thinking with God’s Word, it’s readily apparent that every life has value, worth, and dignity.

Our Western culture needs to hear the message that people are made in God’s image and have intrinsic value. What a difference it would make if people truly believed that! And they need to hear the life-changing message of the gospel of Jesus Christ. Because of our sin in Adam (Romans 5:12), we all deserve the penalty of death, but Jesus came and died in our place, taking our penalty upon Himself (2 Corinthians 5:21). He freely offers forgiveness and the hope of eternal life to all who will repent and believe in Him (Romans 10:9–10) so we can live forever with our Creator.

Due to the winter storm, Friday evening’s “No choice but pro life” event at the Creation Museum on January 22, 2016, has been canceled. Watch this video by Dr. Tommy Mitchell, a medical doctor who was scheduled to speak at the event, as he answers the question: when does life begin?

Previous Article The Ark Promoted in San Diego? Next Article Young People Like the Bible but Not Church