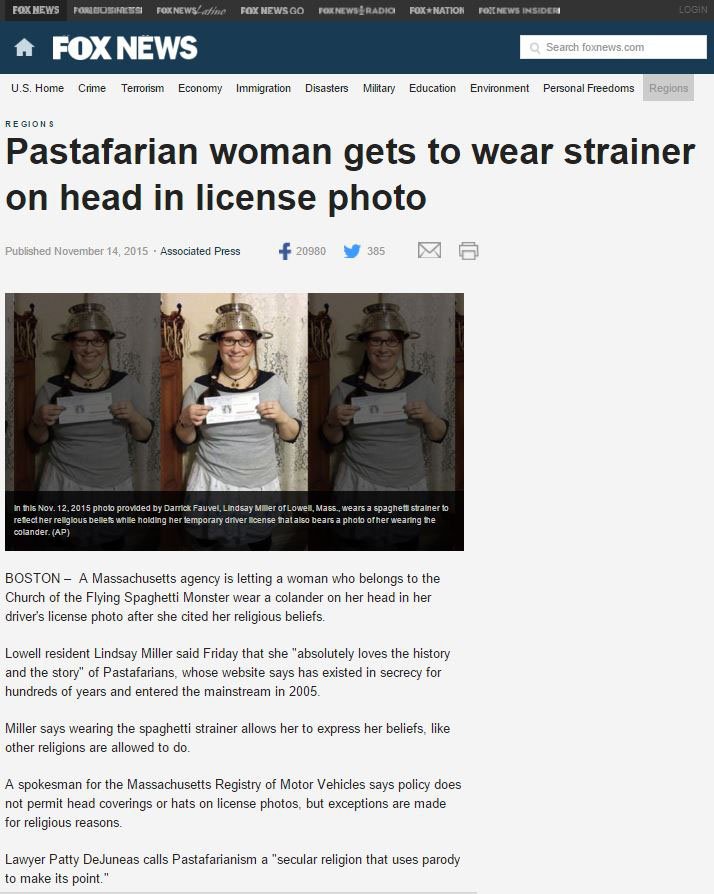 Here is the Fox News headline: “Pastafarian woman gets to wear strainer on head in license photo”

It seems half the time when I see headlines in the news I have to wonder if the story is even real satire, or misleading. Well, this headline seems to be real, and it’s just absolutely ridiculous: “Pastafarian Woman Gets to Wear Strainer on Head in License Photo.” It’s just another example of how far our culture has drifted from biblical authority and even from basic respect.

Apparently in Massachusetts, as has happened in other states, a woman who is part of the so-called Church of the Flying Spaghetti Monster claimed that she should be allowed to wear a colander on her head in her driver’s license photo as part of her religious beliefs—and . . . she was allowed to! There’s a law in Massachusetts that you can’t wear anything on your head in driver’s license photos unless the head covering is for religious reasons, so this woman argued that her pasta-following counted as one of those religious beliefs. This is ridiculous and, really, all that this woman is doing is mocking religion. That’s the whole point of the satirical Church of the Flying Spaghetti Monster and its followers, Pastafarians—to mock those who believe in God. In fact, this “church” arose out of the anti-Intelligent Design/anti-creationist movement.

Now, sadly, while Pastafarians are being allowed to wear colanders on their heads for their driver’s license photos, Christians’ rights are increasingly being denied. We’re seeing freedom for so many different things in our culture today, unless it is a Christian trying to live by biblical principles! All of a sudden the rules will change for Christians. What this highlights is that it’s a spiritual battle that we’re fighting. As the Apostle Paul says in Ephesians 6:12, “For we wrestle not against flesh and blood, but against principalities, against powers, against the rulers of the darkness of this world, against spiritual wickedness in high places.” We need to be equipped with the armor of God (Ephesians 6:11–17) and stand solidly on His Word, refusing to compromise with man’s ideas, so we can remain firm in this spiritual battle.