Can We Take the Bible Seriously, but Not Literally?

One of the staff here at AiG recently sent me a photo of a church sign that shows the continued decline of biblical authority here in the US: 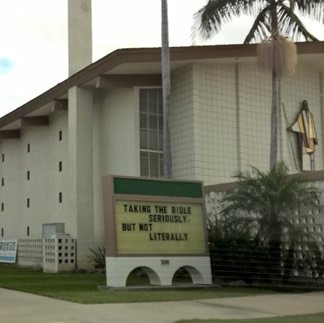 So they take the Bible seriously, but not literally? Well, this second photo that we found of the same church with a different sign further shows that by “seriously,” they don’t mean that they actually treat the teachings of God’s Word with respect and obedience! They don’t take Jesus’ Words in Matthew 19 concerning marriage being between a male and female literally. 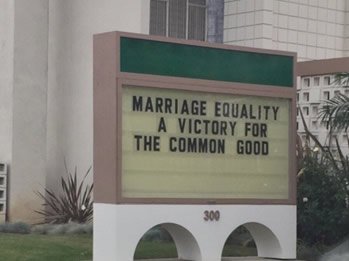 You can’t say that you take the Bible “seriously” and then just ignore what it teaches and believe what’s popular in the culture. God’s Word is abundantly clear that marriage is for one man and one woman only (Genesis 1:27, 2:24; Matthew 19:4–5; Romans 1; 1 Corinthians 6:9), and we aren’t at liberty to redefine what our Creator has designed. So what this church, like so many others today, is really doing is either ignoring God’s Word or twisting it to say what they want it to say. This is compromise with the culture and is clearly not obeying God’s command that we are to “cast down arguments and every high thing that exalts itself against the knowledge of God, bringing every thought into captivity to the obedience of Christ” (2 Corinthians 10:5). It’s anything but “taking the Bible seriously.” It’s more like what Paul described to Timothy: “For the time will come when they will not endure sound doctrine, but according to their own desires, because they have itching ears, they will heap up for themselves teachers; and they will turn their ears away from the truth, and be turned aside to fables” (2 Timothy 4:3–4).

The second half of the first sign shows the problem. They claim they take the Bible “seriously, but not literally.” Now, are we to always interpret the Bible literally? No, we’re not. Actually, by “literally” we really mean “naturally.” We take God’s Word as it is written according to the type of literature and so on. We’re only supposed to interpret God’s Word literally where it’s meant to be taken literally. This is pretty straightforward. Scripture has different genres or types of literature. Each has its own rules of interpretation. It’s no different from today where you intuitively know that a science-fiction novel is to be read differently from a history textbook. Or a love letter isn’t intended to be read in the same way as a car manual. Or poetry is taken differently from historical narrative. Scripture is no different. Different genres require different ways of reading. But it’s really not complicated. Historical books like Genesis, Exodus, 1 and 2 Samuel, or the Gospels are to be read in a literal fashion. They are history books detailing what God has done in the past, so it only makes sense to read them literally. But when it comes to the Psalms, that’s poetry, and it’s full of metaphors, similes, and other literary devices. Obviously it’s not meant to be read in the same way as history. Although even passages using similes, metaphors, and other figures of speech can still convey a literal truth. (You can read more about the different genres of Scripture in this excellent article and more about interpreting Scripture here).

So this church claims that they ignore the literal teachings of Scripture. This likely means that they reject the history recorded in God’s Word, beginning in Genesis. This explains why they’ve rejected the Bible’s teaching on marriage. If you reject the history in God’s Word, that God made a male and a female and brought them together in marriage, then why believe marriage is for a man and a woman?

Now does their rejection of taking the Bible literally also mean that the Bible’s moral commands are up for reinterpretation? Yes! You see, many of the Bible’s moral commands are tied to its history (e.g., marriage)—you can’t separate the two. As soon as you reject the way Scripture was obviously designed to be read, you open the door to reinterpreting Scripture to make it say whatever you want it to say. Instead of standing in obedience to the written word of our Lord and God, we then stand as authorities over it, basically calling ourselves gods. What a dangerous place to be in—fallible, sinful human beings telling the infallible, perfect Judge who knows the end from the beginning what is right and wrong and what happened in history.

We need to take God at His Word, without compromise. Instead of making ourselves into gods, as Adam and Eve tried to do, we need to trust that God knows best and submit ourselves in obedience to His perfect and inerrant Word.

Previous Article Non-Christians Open to the Idea of a Creator? Next Article Can We Know What Color Dinosaurs Were?