Letters to the Governor

You are probably aware that the state of Kentucky decided not to give Answers in Genesis a tax incentive that is equally available to any tourist attraction seeking to build in the state and meets a specific set of requirements (once the attraction has been open for one year). AiG's Ark Encounter meets all of the state's requirements but were denied the tax incentive simply because of our religious identity and because we will clearly present the gospel message at the Ark Encounter. We have since filed a religious discrimination lawsuit against the state. We did this because Kentucky’s actions are unlawful and they violate the US Constitution, Kentucky’s Constitution, and other state and federal laws. Religious freedom and expression are increasingly coming under attack in America, and if we were to allow these unlawful actions to go unchallenged, it could set a dangerous precedent for religious and minority groups. Find out more at AnswersForFreedom.org.

Well, a family in Kentucky recently wrote to me, as well as the state’s Governor Steve Beshear, to show their support for Ark Encounter and to challenge the unconstitutional actions of the state government. The family wrote to me, “Keep building! We are in full support. We are praying . . . . Your ministry is needed, we support it, and you will succeed.”

In the package they sent to me, they also enclosed several letters that they sent to Governor Beshear. The family's mother, a Kentucky business owner, writes,

I believe [Ark Encounter] should receive the same tax program consideration our state has provided to numerous other, very diverse, organizations. As a religious organization, it is my understanding of the law, that AiG does have every right to maintain their identity by hiring people with shared religious beliefs. This is clearly known in our Federal Law . . . Is it your intention to trump the Federal Civil Rights already provided? . . . I am stumped on coming up with a reason of why the Ark Project is a drawback for Kentucky. There is no explanation except my belief that a very loud, influential minority is in the ear of our Kentucky government officials . . . Please give careful re-consideration to this poorly thought out decision. Pray about it and let Kentucky stand out in this great nation as having protected religious freedom instead of discrimination against it.

Here is a letter that her twelve-year-old also wrote to Governor Beshear: 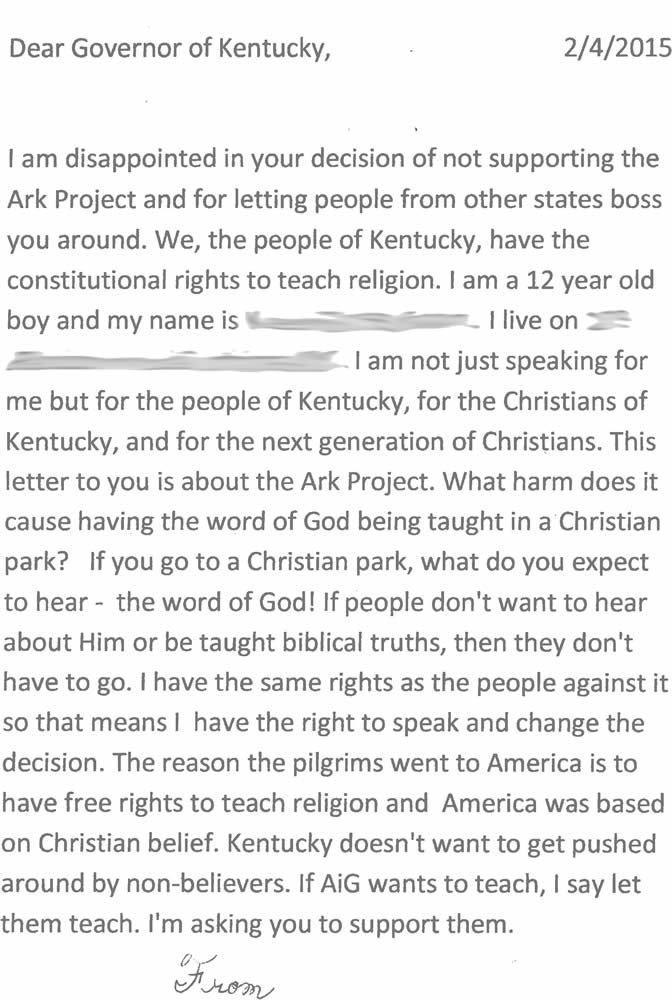 And here is a letter that the nine-year-old wrote: 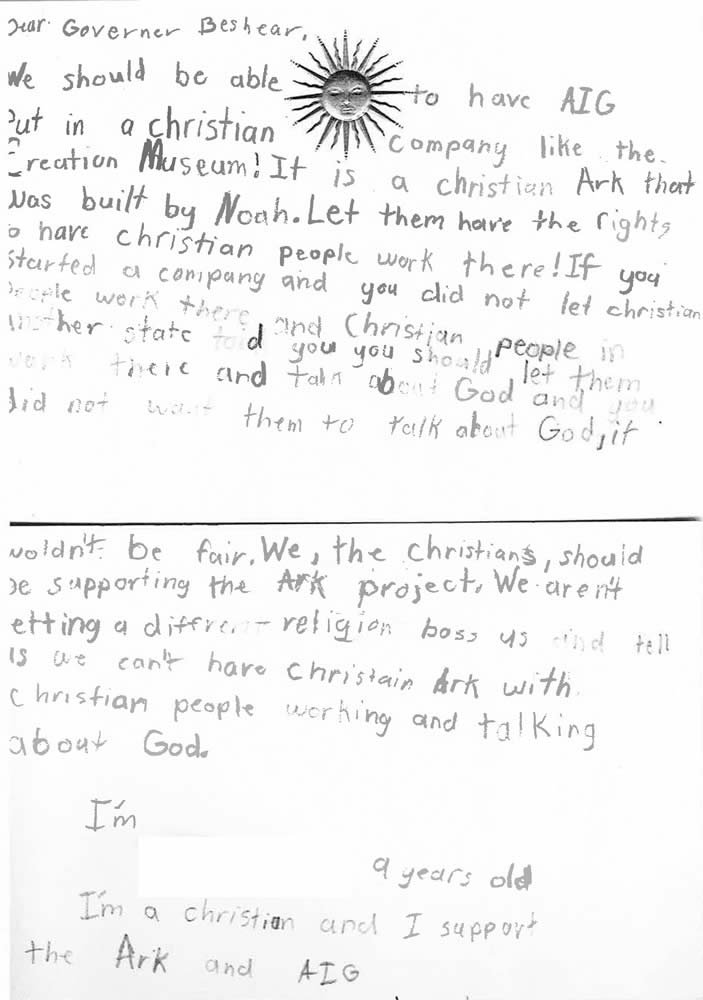 Please be in prayer for us as we challenge the state of Kentucky to honor the Constitution and preserve religious freedom in America. To better understand the issues involved, and to watch a video of me interviewing our attorney Mike Johnson (offering his servicies to AiG at no charge) about this religious liberty case, see AnswersForFreedom.org.