Roe v. Wade and the Religion of Death

Our world is so full of life—but so full of death. We also see so much love and yet so much hate. And it’s a world of happiness but a world of sorrow. It all seems so contradictory. Why?

There is a book, a very special book, that gives us the answer. It’s the written revelation that the infinite Creator God has given to us in His Word, the Holy Bible, and it explains what happened to bring about death, hate, and sorrow.

When God made the first man Adam, He didn’t force him to love his Creator. He gave Adam a choice as a test of obedience. Adam was told not to eat from one tree—the Tree of Knowledge of Good and Evil. God had two special trees in the Garden of Eden—the other was called the Tree of Life. The tree Adam was instructed not to eat from is what I call the Tree of Death. That’s because Adam was told that if he disobeyed God, then he would “surely die” (Genesis 2:16–17).

Adam disobeyed God (the Bible calls this disobedience “sin”) and a world full of life thus became a world of life and death. Right at the beginning, Adam had a choice between life and death—and sadly he (and thus all who are of Adam’s race) now have to suffer the penalty of death.

When Adam sinned, he died spiritually immediately, as he was alienated from his Creator. He also began to die physically.

All through the Bible, from beginning to end, we see that battle between what I call the “religion of life” and the “religion of death.” Because of our sin, the Bible tells us that God sent His Son to become a member of Adam’s race and pay the penalty for sin. He died on the Cross and was raised from the dead, thus providing the way for those who receive His free gift of salvation and have eternal life with our Creator.

This battle between life and death is found all throughout Scripture, until the time described when death will be thrown into the Lake of Fire at the Final Judgment. Then those people who have chosen life in Christ will live with Him for eternity, and those who have chosen life without Christ will suffer the second and final death of separation from God for eternity.

Then I saw a great white throne and him who was seated on it. From his presence earth and sky fled away, and no place was found for them. And I saw the dead, great and small, standing before the throne, and books were opened. Then another book was opened, which is the book of life. And the dead were judged by what was written in the books, according to what they had done. And the sea gave up the dead who were in it, Death and Hades gave up the dead who were in them, and they were judged, each one of them, according to what they had done. Then Death and Hades were thrown into the lake of fire. This is the second death, the lake of fire. And if anyone’s name was not found written in the book of life, he was thrown into the lake of fire. (Revelation 20:11–15)

Today, as Americans think about the 42nd anniversary of the Roe v. Wade Supreme Court case that resulted in the legalization of abortion in the US, resulting in more than 50 million children murdered in their mother’s wombs, I pray that we will weep before a holy God for those who chose death rather than life. 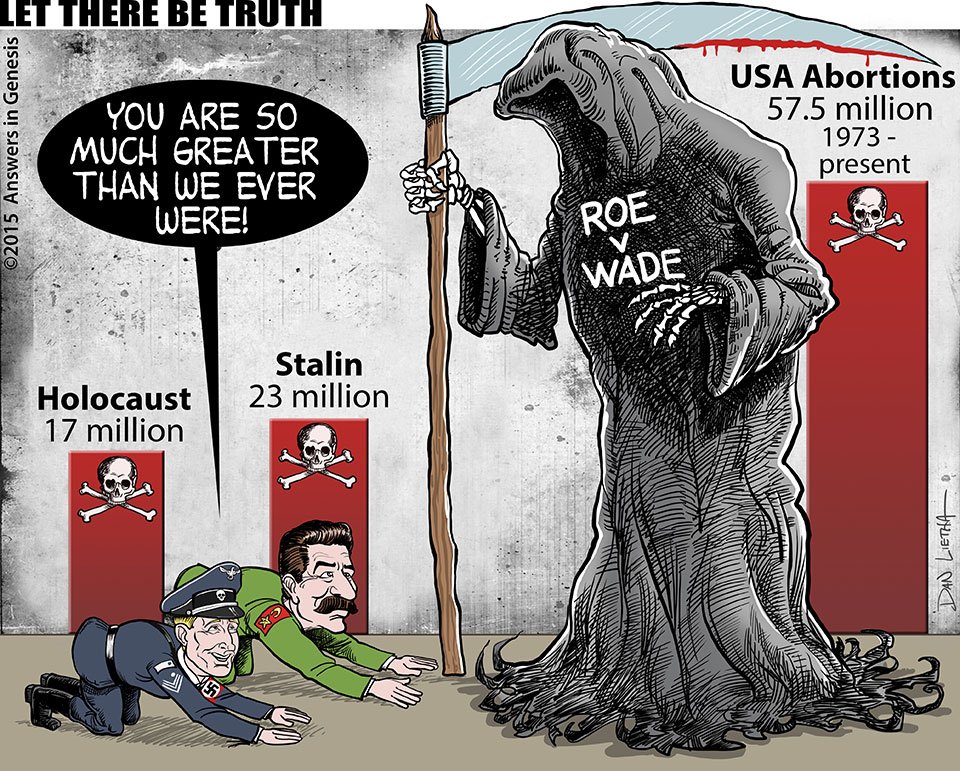 Forty-second anniversary of Roe vs. Wade

Think about the fact that the deaths of millions in the Nazi Holocaust, caused by a madman, Hitler, who accepted the religion of death, now pales in comparison to the number of children who have died at the hands of abortionists in the US.

Think about the fact that as so many in this nation will rightfully cry out against the murders at the hands of terrorists, many of the same people will support or condone the killing of millions of children in their mother’s wombs. The same people may cry out against the cruel treatment of animals, yet they will accept the killing of children by abortion. The list could go on! When it comes to human beings, so many people choose the religion of death instead of life when it comes to unborn children. What hypocrisy there is in the land.

For you formed my inward parts; you knitted me together in my mother’s womb. I praise you, for I am fearfully and wonderfully made. Wonderful are your works; my soul knows it very well. My frame was not hidden from you, when I was being made in secret, intricately woven in the depths of the earth. Your eyes saw my unformed substance; in your book were written, every one of them, the days that were formed for me, when as yet there was none of them. (Psalm 139:13–16)

On this day, I urge everyone to side with life, not death, for the sake of children made in the image of God (Genesis 1). And I also urge everyone to choose life—eternal life—in Christ, instead of the second death that will separate people from their Creator forever in a place the Bible calls hell.

Because, if you confess with your mouth that Jesus is Lord and believe in your heart that God raised him from the dead, you will be saved. (Romans 10:9)

Stand for the religion of life!