Earlier this week, we announced that AiG has (through its marketing agents, JDA) posted an animated 15-second digital billboard in Times Square, New York—right where people will gather tonight for the New Year’s Eve celebrations. This billboard, above one of the stages and near the famous ball drop, will continue to be played on another board in Times Square after January 1, and in other locations in the nation.  For more information, check out our detailed article on this outreach.

It has been thrilling to see numerous media reports across the nation about the new boards, such as this one I’ve linked to below, reporting not just on our digital billboard, but also on the message behind it. We have also been interviewed on radio and TV about this campaign. Yesterday, I was on a national news radio program discussing the billboards and the message of a Christian’s freedom from the bondage of sin, and the freedom of religion and free exercise of religion (First Amendment guarantees) we need to see maintained in America.

Check out this billboard article (typical of many that featured across the nation) from The Blaze.

I have also included a photograph of one of the five panels of the 15-second video board that appears in Times Square. It shows how this digital billboard—with the Cross prominently displayed in one of the panels—really stands out. In the photo, you can also see the staging being put up for the New Year’s Eve celebrations tonight. 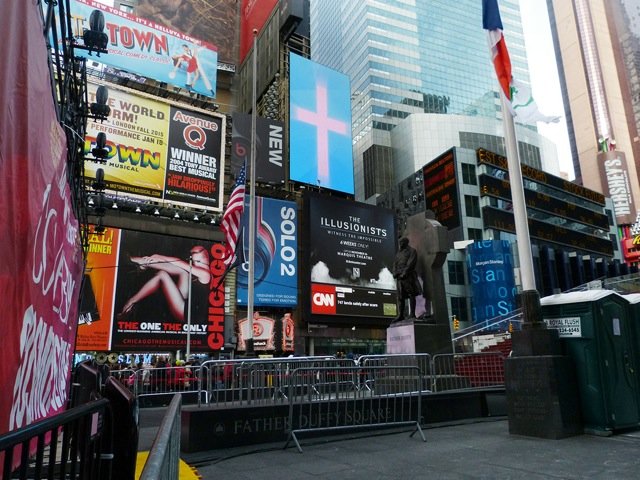