Is an Orangutan a Person? 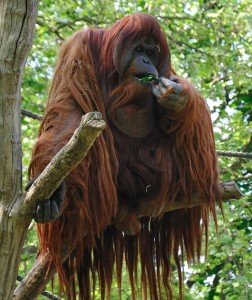 An orangutan at the Berlin Zoo in Germany.

Image credit: by David Arvidsson (originally posted to Flickr as DSC_1055_ApesEat) [CC BY 2.0], via Wikimedia Commons.

Human rights are not just for humans anymore! You see, according to Reuters, animal rights lawyers recently argued in an Argentinian court that a 29-year-old female orangutan named Sandra was being held unlawfully in the Buenos Aires Zoo. They “argued the ape had sufficient cognitive functions and should not be treated as an object.” The courts recently decided that “the ape [is] a ‘non-human person’ unlawfully deprived of its freedom” and, if the ruling is not appealed within 10 days by the zoo, she will be released into a Brazilian sanctuary.

I recently blogged about a similar case involving a chimpanzee in New York. Thankfully, in that instance, the courts decided that a chimpanzee is not entitled to human rights. But this case in Argentina could potentially pave the way for similar rulings around the world. A lawyer from the animal rights group involved in the orangutan case said, “This opens the way not only for other Great Apes, but also for other sentient beings which are unfairly and arbitrarily deprived of their liberty in zoos, circuses, water parks and scientific laboratories.” According to this kind of thinking, if an orangutan can be classified as a person, then why not also classify dolphins, dogs, or chimpanzees as persons? Where do you draw the line?

Sadly, this ruling highlights how humans have lost their position as unique and special in the minds of modern culture. This is largely due to evolutionary influences. After all, if human beings are descended from animals, then we’re just advanced animals. But if you start from the Bible, you get an entirely different view of human uniqueness. According to God’s Word, we were uniquely created in the image of God (Genesis 1:27) as separate and distinct from the animal kingdom (Genesis 2:20). Personhood is not dependent on cognitive ability or level of development. Personhood is a unique characteristic of mankind because God has created us in His very image. So, regardless of what the courts decide, orangutans are not persons because they were not created in the image of God.

Sadly, all around the world we are seeing the elevation of animals and the depreciation of humans. In the United States, and many other countries, it is illegal and punishable by huge fines to kill certain endangered species, but it is perfectly legal and acceptable to murder a baby in the womb! Rather than placing a high value on all human life, like God does, our culture has shifted the value and focus to animals and the environment. Now, while we are supposed to be good stewards of what God has given us, and while saving endangered species can be important, this shift is the natural outcome of an evolutionary worldview which seeks to “worship and serve the creature rather than the Creator” (Romans 1:25). Instead of starting their thinking on biblical principles, many people are now basing their thinking on evolutionary ideas, which naturally lead to “everyone doing what is right in his own eyes” (Judges 21:25). Man’s ideas are increasingly being seen as the authority while God and His Word are rejected.

I encourage you to be bold in standing on biblical principles in a world that is rapidly rejecting them. We need to start our thinking in every area on the Word of God because it is God’s Word, not man’s, that is true and that is a rock-solid foundation for us to build our lives on.