Enquiring with the Enquirer?

Is the secular media by and large guilty of trying to censor Christianity from the public eye? I believe it is. Here is an example from the area where our Creation Museum is located.

Recently our Cincinnati Enquirer newspaper had a list of several “staycation” attractions (i.e., day-trip “mini-vacations” to take in our region) that were presenting “new offerings.” Yet the immensely popular Creation Museum, which has opened world-class offerings each year to our exhibits since our opening, was omitted.

A friend of the Creation Museum wanted to point out this omission, so on Saturday he submitted the following letter to the editor—to date this letter has not appeared in the print edition of the paper, and maybe it will:

Editor: One popular local attraction noticeably absent from your list of ten places for a “staycation” that feature “new offerings” (July 4) is the Creation Museum. It’s new $1.5 million allosaur dinosaur exhibit, a recently opened world-class insectarium, and now the largest zip-line course in the Midwest are additional reasons that crowds continue to pour into this family friendly place that I have been visiting with my children since 2007. Sincerely, Pat M.

Well, in today’s print edition of the Enquirer’s sister paper, the Kentucky Enquirer (remember, our museum is located in northern Kentucky), there is a list of many “kid-friendly” places and events in northern Kentucky. Can you guess what was omitted, including under the museum category? Yes, the Creation Museum. Even though kids 12 and under are free this year, we have added a spectacular world-class $1.5 million allosaur exhibit, and families are coming here from all across the USA and around the world to visit, the Enquirer editors, with rare exception over the years, have apparently chosen once again not to mention the Creation Museum in their list of local attractions. I suspect these editors are embarrassed to have us here in their “backyard” because the museum gives an unashamedly Christian message—yet they must know that our visitors bring tens of millions of tourist dollars into the area each year.

Now, we note that some of the Enquirer reporters have been fair towards us in their news reporting of our museum and future Ark Encounter, and we’re grateful. But the editors of some of the paper’s departments—especially those oversee the “things to do” in the region—apparently have chosen to ignore us. And such an omission has happened frequently regarding such lists—ignoring an attraction that has drawn well over two million people and brought in hundreds of millions of dollars into the local economy. 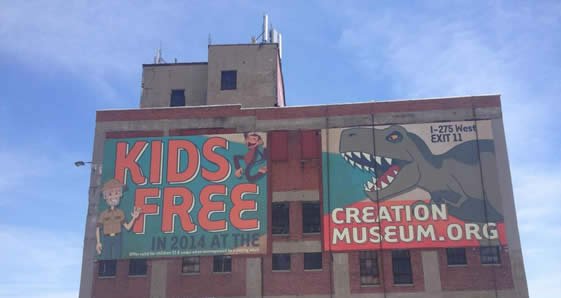 Despite some of the local media snubbing the world-class Creation Museum, the Lord continues to bring multiple thousands of adults, teens, and kids to the Creation Museum each week.

Here is the web version of the Monday article from the northern Kentucky edition of the Enquirer with the list that ignored the Creation Museum.

And here are two other lists of area attractions—from May 20 and June 18—in the Cincinnati edition of the Enquirer that did not mention the museum as a “staycation” attraction in the Cincinnati and northern Kentucky area that were featuring “new offerings.”