It’s Time to Break the News to Secularists!

Last year (and even earlier this year), many secular websites and blogs, in their desperate attempts to deliberately malign the Creation Museum, tried to spread blatant untruths about the museum’s attendance and revenue. What’s new for these people who it seems will stop at nothing to attack us? By spreading untruths through the Internet, they were hoping that if they threw enough mud, it might dissuade some people from visiting the museum.

For instance, one secularist website had this headline: “Creation Museum Running Out of Cash and Going Extinct?” That’s certainly what they were hoping was true!

The article then went on to state the following:

In an interesting, though not very surprising, development, it seems the Creation Museum in Kentucky is running out of money. And it seems the problem is that, like creationism itself, there is nothing new or different about the exhibits at this “museum”. The irony is that Ken Ham and other creationists claim the Creation Museum is doing scientific work which proves creationism to be true, yet since the place opened 5 years ago nothing has changed and no new “creation science” research has appeared.

But anyone who has visited the Creation Museum would know such statements like “nothing has changed” here are false—even though, other secularists (who don’t do their research as they should) then just repost such nonsense and it spreads across the Internet.

For instance, last year the Creation Museum added the spectacular world-class insect exhibit with the very latest in animatronics and the Dragon Legends exhibit.

And, although we think dinosaurs are extinct, they certainly are not extinct at the Creation Museum! This year we added the $1.5 million Allosaurus exhibit—as detailed scientific research on this fossil continues behind the scenes.

Also AiG scientists and other scientists who work with AiG continue to research various topics and publish findings in our peer-reviewed Answers Research Journal edited by AiG’s director of research Dr. Andrew Snelling.

And it’s time to break more news to the secularists who falsely report about the viability of the Creation Museum. The museum continues to be a roaring success. In fact, this year, attendance on a number of days has broken records—exceeding our own expectations.

Even if you don’t include the number of children coming to the museum during our “Kids Free” program this year (we have seen a record number of children visiting the Creation Museum, praise God), attendance figures of teens and adults also coming have been higher than in recent years. The visitor numbers are phenomenal—still way above what we projected when we opened in 2007.

This photograph (taken last week) shows a typical day at the Creation Museum this year, with numerous people in the Main Hall, while lots of others are inside the theaters and going through the main museum exhibits: 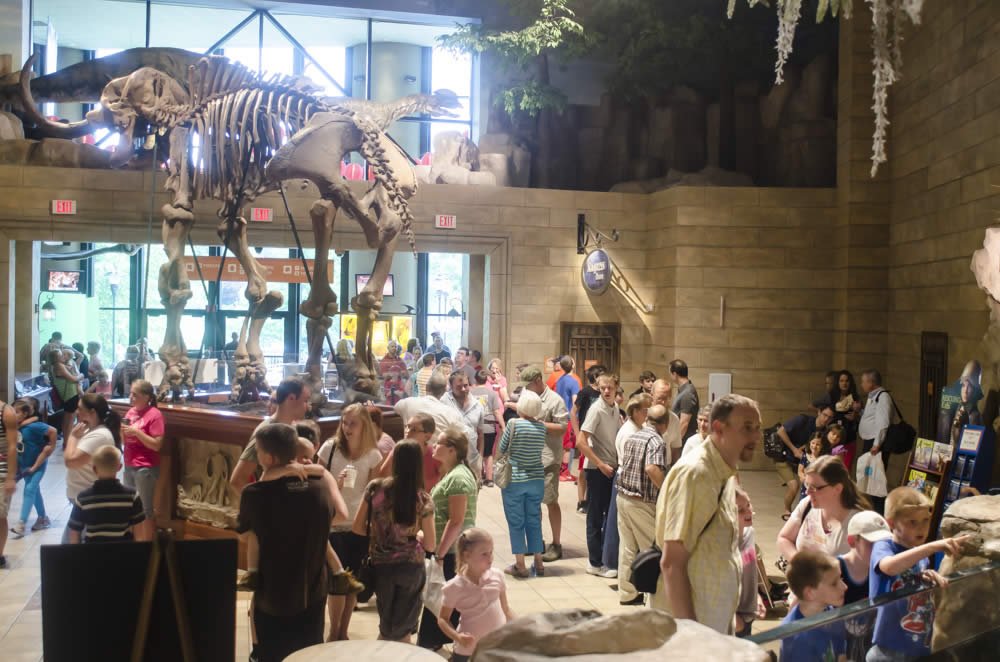 We praise the Lord for the continuing success of the Creation Museum, as the message of the truth of God’s Word beginning in Genesis and the saving gospel are spread by this unique facility.

Make sure you visit soon!

Construction of the Ark Encounter

Oh, and for those secularists who have been desperate in their attempts to oppose the coming of the full-size Noah’s Ark project—and have spread rumors of its supposed demise—keep watch. As some construction bids have already been let for certain aspects (we have over half of the $73 million raised for phase 1 of the Ark through a successful bond offering, donations, and Ark memberships1), it won’t be long before I will be able to include video of the massive earth work that will be going on, leading up to the construction phase! Keep up to date with the Ark Encounter project.

I also encourage you to consider obtaining a lifetime boarding pass (for individuals or families) for the Ark Encounter. These boarding passes will not be offered once the Ark is opened.

Previous Article “WOW. What an amazing place.” Next Article Missing the Point About the Contraceptive Mandate