A Prayer Ministry and Bill Nye

In Luke 11:2, right before Jesus taught what we call the “Lord’s Prayer,” Jesus said,  “When you pray . . . ”  In fact, a number of times in the New Testament we will read that phrase “When you pray.”  Not if you pray—but when you pray.  Many of you were praying specifically for my debate with Bill Nye—and AiG had a prayer team at the Creation Museum that evening.

When I debated Bill Nye “the Science Guy” here at our Creation Museum this past February, many things were happening behind the scenes to make the event possible. (By the way, our web team estimates that around 14 million people worldwide have watched the debate either live or on a video archive such as debatelive.org/.) None was more important than what was performed by a group called “Common Thread Ministries.”

Based in Georgia and led by ministry friend Mark Mirza, CTM made it possible for many people around America to pray before and during the debate. In fact, Mark drove up from northern Georgia with several people to be here at the museum during the debate—not to watch it, but to be off in one of our museum rooms to bathe the event in prayer and to pray for Mr. Nye, the people watching the debate, and me—plus all the AiG staff involved in making sure that it was a well-run event.

Mark returned recently to AiG and spoke to our staff on the topic of prayer.

I encourage you to find out more about Mark’s ministry of prayer by going to his website of www.CTMPrayer.org. Mark is available to come to speak to churches on a freewill offering basis.

Here’s a photo of Mark speaking to our staff last week: 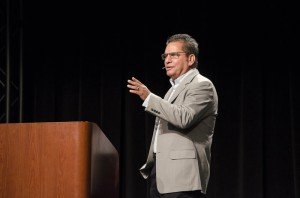 And let’s continue praying for Bill Nye—and for all those non-Christians who have watched or will watch the debate—that the Lord will open their hearts to the truth of His Word and the gospel.

Previous Article Genesis and “God and the Gay Christian” Next Article Join Us Online Thursday for the Hammer and Peg Ceremony!