I sometimes use this blog to share some of the behind-the-scenes activities at the Creation Museum and AiG, including mentioning some of the media outlets that continue to drop by, tour the museum, and interview us. On just one upcoming day, we will have a TV crew coming from Australia, and earlier that same day we will be visited by a newspaper reporter from Denmark.

We also welcome many special speakers who give devotionals for our staff on several mornings each month. It is a time for these speakers to encourage our staff at the beginning of the work day, and for our staff to be introduced to other ministries. It was a special time Tuesday morning as Pastor Peter LaRuffa of Grace Fellowship in northern Kentucky spoke to our staff and presented a devotional on John 1:14 and other verses. He shared with us that he sees AiG’s apologetics outreach in the light of the second half of John 1:14, “And the Word became flesh and dwelt among us, and we beheld His glory, the glory as of the only begotten of the Father, full of grace and truth” (emphasis added).

As he emphasized the final three words of that passage, Pastor LaRuffa pointed out that there might be ministries who don’t want to speak the truth with boldness, but instead present warm and fuzzy messages. There needs to be a balance, he said, between extending grace and proclaiming truth. For example, he was kind enough to share with our staff that in our recent debate with Bill Nye, we did not come across as harsh—that we presented the truth, including the gospel, with boldness yet with a sincere heart for Bill Nye and the secularists watching the debate. Thank you, Pastor LaRuffa. 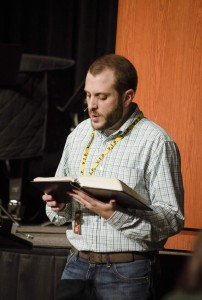 No, I mean the other BMW—Biblical Ministries Worldwide. While I was away “down under” last month, my friend Dave Rozelle spoke to our staff and also visited some of our new exhibits inside the museum, including “Dr. Crawley’s Insectorium.” I first met Dave almost 25 years ago on a speaking tour of Scotland. Dave lived there as a missionary and organized for me to speak in the well-known Presbyterian facility in Edinburgh called the Assembly Hall. Frankly, some Presbyterian leaders were not too keen on having me speak there, but I was thrilled to address several hundred people, which by Scottish church standards was a huge event.

Dave now works with an organization called Biblical Ministries Worldwide based near Atlanta, Georgia. In this photo, you can see Dave and his wife Joy on the right, just after he spoke to our staff, along with AiG’s Mark Looy and my son Jeremy. The Rozelles have known our family going back to the early 1990s, so we thought it would be good to have them catch up with Jeremy. 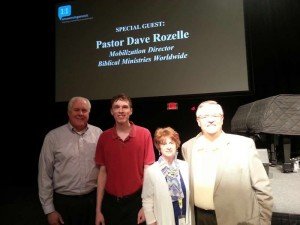