There has been much talk in the media about the comet ISON that was (past tense!!) going to put on a spectacular display for us.  AiG astronomer Dr. Danny Faulkner authored the script for the incredible Comet ISON planetarium program at the Creation Museum.

Well Dr. Faulkner has good news and bad news in regard to comet ISON.

First, the bad news—the comet won’t put on the spectacular display astronomers were hoping for—it’s all but disintegrated.

Dr. Faulkner wrote the following blog on ISON to keep you up to date—and to once again challenge those who believe in a billions of years old universe:

Wow, that didn’t last long! I had hoped to continue with a number of installments about Comet ISON after its close pass by the sun November 28. As you probably have heard, Comet ISON didn’t survive. Actually, a small fragment did survive, but that fragment was so fried that it isn’t putting out much gas or dust anymore. The comet is far too faint to be seen with the naked eye, so, for all practical purposes, it’s gone.

Since July here at the Creation Museum we’ve had a planetarium show, “Fires in the Sky,” about comets in general and Comet ISON in particular. In that show we anticipated what Comet ISON might look like this month. We had planned to revise the show after this month anyway to reflect what the comet indeed had done, and to continue running that show for some time. Now we’ll just have to revise the show more than we had expected.

Still, the catastrophic loss of Comet ISON underscores the major point of the planetarium show—that comets indicate that the solar system is far younger than most scientists think. Comets are very fragile. Many astronomers thought that Comet ISON was making its first pass by the sun, yet it couldn’t survive even one trip. If the solar system is billions of years old, there ought not to be any comets left, so most astronomers think that the nuclei of comets are held in a sort of cold storage far from the sun, either in the Oort cloud or Kuiper belt. Then occasionally gravitational tugs pull comets in toward the inner solar system. However, there is no evidence that the Oort cloud exists, and the evidence for the Kuiper belt is problematic. On the other hand, if the solar system is only thousands of years old, then there is no problem with comets still being here, despite the rapid rate at which we’re losing them. I urge you to follow Dr. Faulkner on his blog at:  blogs.answersingenesis.org/blogs/danny-faulkner

Here is a cartoon about comet ISON from AiG cartoonist, Dan Lietha: 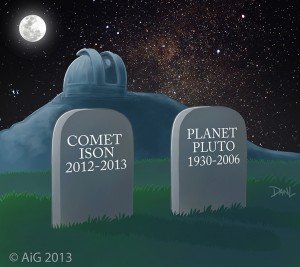 The Creation Museum’s spectacular New ChristmasTown continues tonight—there should be a little snow on the ground as a storm just passed through, which should make everything look quite beautiful. Go to this link for more information about Christmas Town:  CreationMuseum.org/Christmas.  Watch our video on YouTube promoting Christmas Town:

Previous Article Are Churches Preaching an Irrelevant Christmas Message? Next Article You Can Join Us in California in 2014