One year after they married, Melody and Kevin of Dayton, Ohio, paid a return visit to the Creation Museum. Why is the museum such a special place for the couple? I’ll let Kevin, who has only been a Christian for two years and already has a passion for creation apologetics, tell you why and then I’ll show you a photo of them:

On May 12 last year, we spent the morning at Newport on the Levee [a shopping area in northern Kentucky and across the Ohio River from Cincinnati]. Then we headed over to the Creation Museum that afternoon. We watched two planetarium shows, and then I took Melody to the outdoor garden.

We walked around the garden for a while before sitting down under the pergola, where I proposed to her. I chose this location not just for the beautiful setting, but also for symbolic meaning. I wanted to symbolize my desire for our marriage to have a firm foundation in God’s Word and His will; the Creation Museum certainly is symbolic of that firm foundation.

Well, Melody was able to catch on to everything. I failed to surprise her. However, she joyfully said yes, and we have been happily married since October 20, 2012.

Here is a photograph of Melody and me right after I proposed on May 12, 2012: 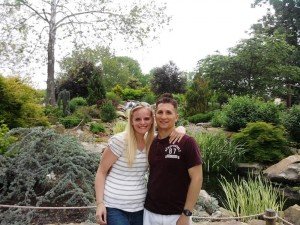