It’s an answer to prayer!

For years I’ve really wanted to see the Creation Museum display a world-class dinosaur fossil. The Creation Museum already displays some high-quality fossil dinosaur eggs and footprints (and some fossil bones)—and, of course, we also have impressive dinosaur sculptures meticulously sculpted by our own Buddy Davis. The Creation Museum also exhibits some classy animatronic dinosaurs that move realistically. Now next year, the Creation Museum will display the fossil remains of a remarkable specimen—an allosaur. Given to us by the Peroutka Foundation, it is believed to have one of the four best-preserved Allosaurus skulls ever discovered. 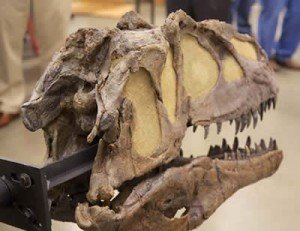 The new allosaur, as today’s news release states, “probably stood 10-feet high and 30-feet long. It stands out for a few reasons. It was found with its bones arranged in their correct anatomical positions relative to each other rather than in a scattered assortment of bones as is often the case. Also, much of the spine and 97% of the skull were found. Lastly, the skull is much larger than the famous ‘Big Al’ dinosaur at the Museum of the Rockies in Montana.”

Our geologist and research director Dr. Andrew Snelling states in the news release that “unlike the way most of the Morrison Formation dinosaur bones had been found scattered and mixed, the intact skeleton of this allosaur is testimony to extremely rapid burial, which is a confirmation of the global catastrophe of a Flood a few thousand years ago.”

Many secularists will be dismayed that the Creation Museum was given such a wonderful fossil specimen that will be used to teach the truth of God’s Word beginning in Genesis. But once again, God is specially blessing a facility that honors His Word!

The Creation Museum’s very talented designers are working on a spectacular exhibit we hope to open by Memorial Day weekend 2014!

To find out more about this spectacular addition to the Creation Museum, I encourage you to read the press release AiG sent out to media outlets today.