While I am in Australia to visit family, I have asked some of our staff members to file reports for me that I could share with you in this space. The following was written by my brother Steve, who, as Senior Director of Outreach (which includes overseas ministry), recently ministered in the United Kingdom—in the countries of England, Wales, and Northern Ireland. Here is his fascinating report (which was also posted on our Worldwide Outreach blog), with an anecdote that was eye-opening:

The excitement for Answers in Genesis’s biblical authority message in the churches we visited was overwhelming. Yet, with all the positive response, our heart for the people of UK has grown even more fervent to help them know the truth of God’s Word and the reliability of the gospel of Christ.

While there, I was able to see some great sites that are dedicated to the memory of when the UK was home to godly men who were courageous and unashamed of biblical truth and the gospel message. Men such as John Bunyan, John Owen, John Gill, John Wesley, and George Whitefield were unshaken in their stance on biblical truth and gospel proclamation. While visiting some of the places attributed to the works of these men, I was able to proclaim this same gospel. And I found that the people in the UK were facing an altogether different barrier to the gospel message than was experienced by these great men of the past.

At one stage of our trip, we were looking at a gravesite of one of the great British preachers of the past. We had the distinct privilege of meeting the caretaker of this particular gravesite. We asked a few questions about it, and the man had a good knowledge of the period of history associated with the preacher. When we asked him about what the preacher actually taught, however, there was a very different response. Every day this caretaker would walk past the preacher’s grave without a thought of the fervency of his preaching. We asked where he thought this preacher might be right now, and this is where our real conversation started. The caretaker exclaimed, “I’m a modernist.” We talked a little about what being a modernist really means. In the caretaker’s mind, modernist means that the preacher had an archaic view of the world, uneducated by modern science and unable to know that what he was preaching was just a myth.

When the caretaker asked us if we were Christians, we answered yes. His next question was not surprising in one sense because we understand how naturalistic and atheistic worldviews have indoctrinated people. He actually asked, “How old do you think the world is?”

After answering with the biblical answer for the age of the earth (about 2,000 years to Christ and then another 4,000 years to Adam, who was created on the sixth day), the gentlemen started with a barrage of statements about how the “scientists” and “evidence” prove that this cannot be correct.

It then got even more interesting.   He remarked that we sounded like those crazy people from the Disneyland museum in America—referring to our Creation Museum! If you could only have seen the smile on my face after this statement! I replied, “Well, as a matter of fact . . .”

Given that the caretaker had mentioned evidence for millions of years, I asked him to give me just one example. He generally brought up the age of rocks and the fossil record. This response made way for us to talk about assumptions in dating methods, the fallacies in those assumptions, and how we all have the same evidence that is interpreted differently because of our starting assumptions.

I could share more with you about the whole discussion, but the bottom line is that by being able to answer this man’s statements about the age of the earth, we were then able to point him to biblical truth. Because he could then see this is a worldview issue, without further argument he listened carefully as we talked with him about the gospel of Jesus Christ and his need for our great Mediator.

This was not the only event where we had noticed that “evolutionized” thinking had become a barrier to hearing the gospel of Christ. This evangelistic challenge is a problem all over the UK. What is most saddening to us is that it seemed as if this was the first time this man had ever heard the gospel of Christ. He was the caretaker of a monument to a great Christian teacher, yet he was clueless about the gospel. When I thought of how many Christian tourists would have passed through such gravesites and did not share the gospel with the workers there, I was saddened and convicted to be more bold for my Savior’s good news.

The ministry of AiG in the UK is vital. The church there needs to be equipped to answer the indoctrination of millions of years, naturalism, and evolution that is dogmatically taught in this culture. They are presented as absolute facts, without any explanation of the philosophical assumptions they stand upon. Our work in the UK must expand and grow, and we must reach out to a nation of people who need real answers to understanding the world in which they live—and regarding what happens when they stand before God at the end of their life. For that caretaker, the great news is that he asked for more information, and we certainly gave it along with contact details. Please pray for him. Thanks, Steve. This Friday in the UK, the funeral service for my friend and former colleague Graham Scott will be held in Wales. Graham was the first head of the AiG-UK ministry in the 1980s (under a different name). Please pray for his widow Anthea and their daughter Philippa. Thank you.

Speaking in Australia this Weekend

This Sunday I will be speaking in Australia with Australia’s leading creation apologetics speaker, John Mackay, who has been active for 35 years as a creation speaker. The service will be at Browns Plains Presbyterian Church (Brisbane, Queensland). At the morning service I will bring a report on the Creation Museum and ministry of AiG, then John will bring the message. I will then speak after lunch. The entire program is at posted on the church’s website.

Here is a photo of John—he calls himself, “John Mackay the Creation Guy!”: 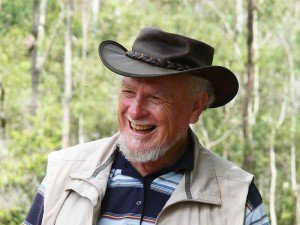