Is It Necessary to Believe in a Literal Adam and a Literal Fall?

Recently, I saw a headline that caught my eye. The secular journal Nature published an article titled “Genetic Adam and Eve did not live too far apart in time.” Now, secularists (and even some Christians) propose the idea that there was “Y-chromosome Adam” and “mitochondrial Eve”—basically the supposed ancestors of human beings.

According to the article in Nature, secular scientists have redated when they believe these two ancestors existed. But you know, these evolutionary scientists have the entirely wrong starting point on this issue, which the opening line of the article makes clear:

The Book of Genesis puts Adam and Eve together in the Garden of Eden, but geneticists’ version of the duo—the ancestors to whom the Y chromosomes and mitochondrial DNA of today’s humans can be traced—were thought to have lived tens of thousands of years apart.

Did you catch that—the “geneticists’ version of the duo”? From the outset, Nature’s report shows that these scientists have lifted man’s fallible ideas above God’s Word. Similarly the article later concludes that the Bible’s reference to “one man . . . is a bit of a misnomer because this Adam was by no means the only man alive at his time.”

Scripture tells us that Adam and Even were historical figures. In fact, together they were the progenitors of the entire human race. Genesis 2 recounts the special creation of Adam from the dust of the earth:

And the Lord God formed man of the dust of the ground, and breathed into his nostrils the breath of life; and man became a living being. (Genesis 2:7)

Eve was later formed from Adam’s side (Genesis 2:21–22). God completed both of these creative works on Day Six of Creation Week (Genesis 1:27, 31). So Adam and Eve were the first couple, according to the Word of the One who was there. The entire human race is related to them in some way (Genesis 3:20), just as we’re all related to Noah in some way, as he and his family repopulated the earth following the global Flood:

Now the sons of Noah who went out of the ark were Shem, Ham, and Japheth. And Ham was the father of Canaan. These three were the sons of Noah, and from these the whole earth was populated. (Genesis 9:18–19).

Sadly, it isn’t just secularists who reject this biblical history—many professing Christians do, too! When I began my teaching ministry over 35 years ago, I said then that if compromise on Genesis continued to spread in the church, then the church would eventually give up an historical Adam. Well, today we’re seeing more and more Bible scholars and church leaders denying a literal Adam and Eve as they attempt to mix evolutionary ideas with Scripture. In fact, the topic of their historicity is such a major one in the church today that it made the cover of a 2011 Christianity Today magazine: 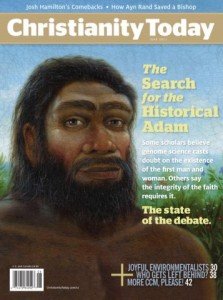 So, why is it so important that the account of Adam and Eve be true? Because their existence is foundational to the gospel! Now, I want to make very clear that belief in a historical Adam and Eve is not a salvation issue per se, but it is a biblical authority issue and a gospel issue. When we deny the existence of Adam and Eve, then how do we explain the origin of sin and death in the world? And if we cannot explain how sin and death came into the world, or if we believe that it was always here, then what was the purpose of Christ’s death and Resurrection? Why was the atonement even necessary?

Therefore, just as through one man sin entered the world, and death through sin, and thus death spread to all men, because all sinned. . . . For if by the one man’s offense death reigned through the one, much more those who receive abundance of grace and of the gift of righteousness will reign in life through the One, Jesus Christ. (Romans 5:12, 17)

The problem with mixing evolution with Scripture is that it undermines the very foundation of the gospel. Can a person still be a Christian even while denying the existence of a literal Adam and Eve? Thank God, salvation is conditioned upon faith in Christ:

Rejecting a literal Adam and a literal Fall makes Genesis chapters 1–3 untrustworthy. In other words, it’s an authority issue—it undermines the authority of the Word of God.  And from there, it’s a slippery slope to making even the gospel message untrustworthy.  Personally, I just don’t see how someone truly and fully understands what it means to be saved if they don’t believe in a historic Adam and a historic Fall!

Of course, I do not want to have a person think that I question the legitimacy of their faith if they reject a literal Fall. But I do need to point out the inherent contradiction in such a compromise as it relates to the gospel message. Again, salvation is conditioned upon faith in Christ (cf. Ephesians 2:8–9). But, to deny a literal Adam and a literal Fall is to deny the origin of sin, isn’t it? So for such a person who denies the literal historicity of Adam and the Fall, what does Romans 10:9 mean to them anyway? Only God knows our hearts and the nature of our faith.

We can trust God’s Word when He tells us that Adam and Eve were the first humans.

For more information on mitochondrial Eve and Y-chromosome Adam, as well as many other genetics questions, I encourage you to visit our genetics topics webpage.

Steve Golden assisted in the writing of this blog post.

Previous Article “Found Out” by the Huffington Post! Next Article Compromising Christians Don’t Like “Evolution vs. God” Film