Back to the Lion’s Den of the NEA Convention

As I head to Tennessee this morning for our Answers Mega Conference that starts tonight, I am giving most of my blog space today to a report on our recent NEA ministry in Atlanta, Georgia.

If you can’t to attend the Mega Conference, you can—for a nominal subscription fee for the four-day meeting—view much of it online. Through the marvels of technology we will be live streaming several sessions of the event.

In this blog post I wanted to bring to your attention AiG’s recent outreach to thousands of public school teachers and administrators in America. Once again this year, AiG donated multiple thousands of dollars’ worth of books, DVDs, magazines, and other resources (all paid for by specific donations designated to this event) to be freely given away to educators attending the annual NEA (National Education Association) conference. The NEA is the biggest such conference of secular educators in America (and the world). This teachers’ union is one of the most humanistic, pro-abortion, pro-“gay” marriage, anti-creation organizations in the USA. Its members are in dire need of the creation-gospel message (though we praise God for the Christian teachers who are something like “missionaries” in the public school systems).

AiG sent a team of volunteers to this convention earlier this month to challenge teachers and other educators with the creation-gospel message. One of the volunteers was Dr. Jobe Martin of Biblical Discipleship Ministries, producer of the DVD series Incredible Creatures that Defy Evolution and his newer Creation Proclaims DVD series. These series (three parts each) proclaim the wonders of God’s creativity as seen through the animal world. Dr. Martin’s testimony of going from a Zen Buddhist agnostic evolutionist to becoming a biblical creationist is found in his book The Evolution of a Creationist (available for free download). 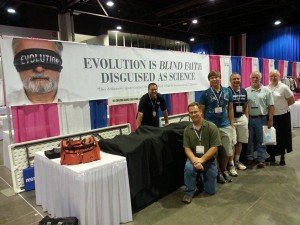 Some of our volunteers at the NEA convention

Dr. Martin and his family have volunteered at the NEA outreach for over ten years. I really appreciate their heart for the lost, their love for the truth, and their willingness to challenge false worldviews using biblical authority. As I head off to Tennessee this morning for our Answers Mega Conference that starts tonight, I am giving most of my blog space today to a report by Dr. Martin on our recent NEA ministry in Atlanta, Georgia.

by Dr. Jobe Martin (excerpted from a longer report) 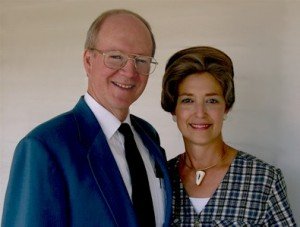 Answers in Genesis is able to participate at the annual National Education Association (NEA) conference because it donates resources and manpower to an official caucus called the “NEA Creation Science Educators’ Caucus.” This highly secular and humanistic convention is the meeting place of America’s public school teachers’ union. Our family has been blessed to be a part of this outreach for over ten years.

Our main goal is to share the gospel. The creation topic is a great platform from which to spring off into the gospel. If we can get people thinking about the fact that there is a Creator, then they can better understand that He, as Creator (the Lord Jesus Christ), has the authority to be their Redeemer (Colossians 1:16–20).

The theme this year for the caucus and AiG booth was “Evolution is Blind Faith Disguised as Science.” As 2 Peter 3:5 states, “They deliberately ignore this fact, that by the Word of God the heavens exist." Because of generous donations to a special “Education Outreach” fund, AiG was able to provide multiple thousands of dollars’ worth of creation DVDs, books, and magazines to pass out for free to the NEA delegates.

In the past, many negative things have happened to our group, including teachers giving us “the finger,” calling us names, equating us with the Taliban, calling us stupid, being extremely condescending, laughing hysterically in our faces, and even throwing the resources we have given them back into our booth or into trash cans. One year, someone at the NEA was offended by the AiG tract dealing with “gay” marriage and sent the authorities to tell us to remove the “offensive booklet” (we didn’t remove it). Last year, a man made a sign and marched up and down in front of the booth to protest our presence there.

This year a man walked all the way around the booth, saying in a loud voice with a determined look on his face: “Lies! Lies! Lies!” A woman (who called herself a Christian) came by yelling that she was going to have us “kicked out” of the NEA convention. Many teachers passed by us with a comment that they seemed to think is original with them, but we hear this smug remark every year:  “No thank you, I teach science.”

There are times when we are tempted to get upset with these people. But then we remember that we are the ones who have the Truth, and that they are caught up in their sins, headed for a terrible eternity. It is sobering and sad to know that their end is eternal separation from God unless they repent. While we never know what to expect from these NEA teachers, we are always encouraged by the following verses:

Blessed are ye, when men shall hate you, and when they shall separate you from their company, and shall reproach you, and cast out your name as evil, for the Son of man’s sake. 23 Rejoice ye in that day, and leap for joy: for, behold, your reward is great in heaven. (Luke 6:22–23, KJV)

If ye be reproached for the name of Christ, happy are ye; for the spirit of glory and of God resteth upon you: on their part he is evil spoken of, but on your part he is glorified. (1 Peter 4:14, KJV)

Thankfully we do not get all bad responses, and actually, for such a “pagan” convention, we get a surprising amount of encouragement. Many Christian teachers made it a point to stop by our booth and sincerely thank us for being there, and filled their bags with the free creation resources.

The topic this year was that evolution requires blind faith. When we had teachers question us about our banner’s message, we told them that evolution is historical science because no human was around “in the beginning” and so we cannot rely on provable or testable science (which is observational/operational science) to give us the answer to the question of origins. Evolution and creation must be taken by faith—either people believe by faith in “Eternal God” or by faith in “eternal matter.” We, as Christians, attest to the fact that operational science supports a young earth perspective. Observational science does not support an old earth idea—therefore, evolution is blind faith.

With empirical science, we were able to share with many delegates the discovery of soft tissue and red blood cells found in dinosaur bones—which points to the fact that these animals could not be millions of years old. We were also able to present the scientific fact that Carbon 14 has been found in diamonds. Of course, we are always ready to share about the specified, irreducible complexity that God has put into the design of His creatures. 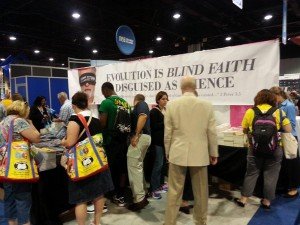 This year, we shared these arguments with a man associated with the pro-evolution booth. We confronted him with all three arguments above. He had never heard about the soft tissue and red blood cells found in dinosaur bones (even though this science discovery is now over ten years old), and he did not seem familiar with the fact that Carbon 14 has been found in diamonds.

He did seem very interested when I started talking to him about my journey from being an agnostic, Zen Buddhist, evolutionist, to a Christian young-earth creationist. I told this man that at one time I taught evolution, teaching my students that fish scales moved into the mouth and became teeth. The man was listening intently at this point. I then explained how I finally started looking at the assumptions in evolutionary literature after being challenged by two of my dental students, and realized that evolution was based on assumptions.

Finally I was able to start talking about the specified, irreducible complexity in the giraffe with this man and how design demands a Designer. I told the man that he had come to understand and believe that the Designer is Jesus Christ. While this man listened for a long time, soon after hearing about the giraffe, he abruptly left. We were very thankful that the Lord kept him around long enough to hear some arguments pointing toward Jesus as the Creator.

The Name of the Lord Jesus is being heard in hard places because of this ministry at the NEA!

Please pray that the teachers will take notice of the creation resources they were given and be driven to watch the DVDs or read the materials. Pray that many will receive the Lord Jesus as their Savior, or be pulled closer to Him as a result. Also, please pray for the Christians we talked to who do not want to believe the pure Biblical account of creation, but would rather accept evolution. Pray that they will be convicted that they can take the Bible literally and thus be able to stand on the authority of the Word of God.

For the word of God is quick, and powerful, and sharper than any two edged sword, piercing even to the dividing asunder of soul and spirit, and of the joints and marrow, and is a discerner of the thoughts and intents of the heart. (Hebrews 4:12, KJV) 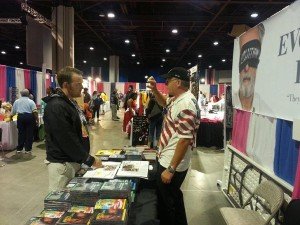 Volunteer Kurt Streutker flew all the way from California to Georgia to share his faith with NEA attendees.

We praise the Lord that for over 15 years now, AiG supporters have donated specifically toward this outreach so that we can do our best to reach these educators in the secular system with the truth of God’s Word and the saving gospel.