It's Both Good and Bad

Almost every day I could write a blog item about a media interview that I have conducted over the phone or done in person at the Creation Museum. Some of these interviews are so interesting that I like to bring them to your attention from time to time.

Now, not all of these interviews result in positive stories. On top of that, bloggers will take snippets from the good reports as well as the bad ones and come up with wild conclusions. They will say incredible things like the Creation Museums revenues are down and the museum is about to fold! (For the record, museum revenues have not declined but are consistent with last year. In fact, revenues were above budget as the fiscal year 2012–2013 just closed. For all of AiG, our revenues are up from the previous year.)

Some bloggers also falsely say that we are not adding new exhibits to the museum, thus we are stale and people have stopped coming. Well, contrary to the critics, the museum has been so successful (far more people have visited than we projected in 2007 when we opened) that we are able to add new exhibits each year. Just a few weeks ago, we opened a world-class insect display, a fantastic dragon exhibit, and added new Bibles to the Verbum Domini collection.

When I think about it, I recognize that many secularist bloggers—whose worldview acknowledges no absolute authority—feel they can lie. After all, by what standard in their belief system is lying wrong if they feel they have a higher purpose of wanting to attack this ministry?

Each year, we receive countless invitations to do interviews with the Christian media—which is understandable—but also with the secular media. Most of the time the interviews are about the Creation Museum and the future Ark Encounter. But, since we also comment on the headlines of the day in terms of what the Bible (especially the book of Genesis) teaches on creation, the sanctity of life, the biblical basis for marriage, and so on, we are often interviewed about these subjects as well.

There is a third group of media representatives who will sometimes come to the museum: religious media representatives who are not Christians. We welcome the opportunity to share the gospel with them, including documentary filmmakers, TV interviewers, newspaper reporters, and others, who may be of a different religious perspective. This includes Muslim journalists like the Arabic news network Al Jazeera, which has been to the Creation Museum twice and reported fairly on us. We have the privilege to expose these religious, non-Christian journalists to the truths of the Bible, especially the gospel message.

Now, of course, when I share the gospel on camera or when I talk to a reporter, it’s not typical for the non-Christian media outlet to publish my comments about salvation in Christ. Sometimes they do—praise God. But at least it’s wonderful to know that we can reach out specifically to the reporter or film crew that’s here—and they also see that the gospel is presented throughout the Creation Museum.

Recently, I had the opportunity to be filmed by a Jewish filmmaker from Los Angeles for his upcoming documentary. This man, who is training to become a rabbi, has a great respect for the book of Genesis. We had a very cordial time, and I made sure to present him with the gospel message as his cameras rolled.

Here is a photo of me with the crew that interviewed me in the Garden of Eden room inside the Creation Museum: 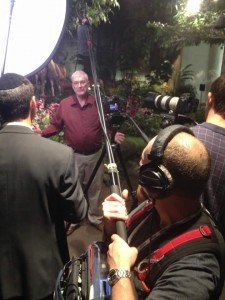 I praise God for the ongoing media opportunities that continue to come our way. During the week before the Jewish filmmaker was here, a four-person television crew from Denmark traveled here to get an update on the museum. They saw a typical busy summer day as our guests enjoyed all that the museum has to offer.