A number of staff members ate at our local Chick-fil-A (CFA) restaurant yesterday for what was called an appreciation day for CFA’s president. He supports biblical marriage, and he has been attacked for it. The turnout of CFA supporters across the country was incredible! I posted some photos of the lines on my Facebook page, and many people responded saying the lines and wait were the same across the country. In Florence, KY, which is about 15 minutes from the Creation Museum, one staff member arrived at 4:30, well before dinnertime, and waited 70 minutes for his food. He estimated that there were 150–200 people ahead of him. Many people on my Facebook page said there was little or no media coverage in their areas (though there was national network coverage on TV). One person who posted on my Facebook wall said customers at his CFA were more upset about the lack of media coming to his restaurant to cover the massive response than the wait.

Chick-fil-A boldly supports biblical values as an organization, and the secularists are intolerant of that. Dan Cathy, president and chief operating officer of Chick-fil-A, said recently, “But as an organization we can operate on biblical principles. So that is what we claim to be. [We are] based on biblical principles, asking God and pleading with God to give us wisdom on decisions we make about people and the programs and partnerships we have. And He has blessed us.” Of course they have a right to do that with the freedoms we still have in the USA, and they welcome anyone to eat in their restaurants. Sadly, because of the growing secularizing of our culture, there is an increasing number of people, a small minority (but very vocal and in positions of authority), who want freedom for just about everything—except for Christians.

A report from a member of our research team who went to the Chick-fil-A in Florence for the appreciation day is below.

When we arrived at Chick-fil-A, we were shocked to see the drive-thru line was wrapped around the building and veered out of sight down the road along the strip of stores. It was around 11:45, and people were lined up around the building! 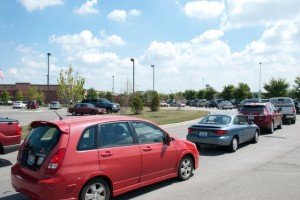 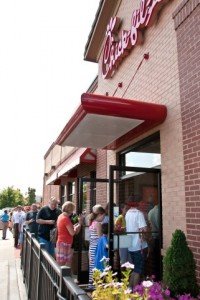 While we were waiting in traffic to get into the parking lot, we saw a couple of people standing on the curb. One was holding a large wooden cross (taller than him) and the other was holding signs in support of CFA’s stand on biblical marriage. People shouted words of encouragement from their vehicles. There were no protestors in sight.

While we waited in line outside (our wait was about an hour), we watched as one of the employees took a drive-thru order. The employee told the customer it was her “lucky” day—she had been selected to get her order for free. The customer responded, “But I want to pay today!”

We were disappointed at the lack of media coverage. To the best of our knowledge, there were no reporters at the restaurant for most of our stay, which was close to two hours. In that time, there was not one lull in the lines! Near the end of our lunch, a reporter and cameraman walked in and interviewed the manager and some customers.

As we waited in line, I spoke with various CFA employees, who said the response had been overwhelmingly positive. They hadn’t heard any negativity from customers. One of the employees said that they had to set up a table with water for people waiting outside. “But everyone’s been very patient with waiting in line,” she continued. I asked the cashier who took my order what time it started to get this busy. He said, “When we opened.” It was awesome to see so many people coming out in support of a company that upholds biblical values! 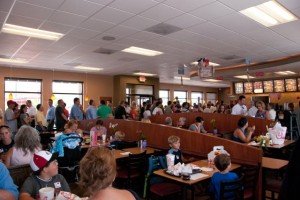 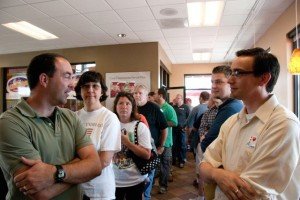 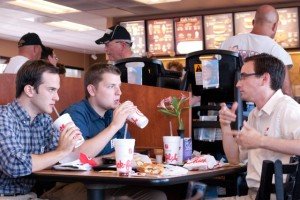 Our group enjoyed a lunch that was entirely worth the wait! 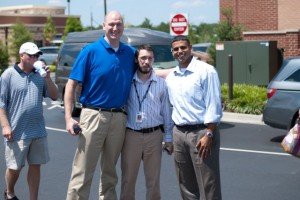 Dustin DiChiara, the owner and operator of the Florence, Kentucky, Chick-fil-A, spoke with me while we were there. He expressed his gratefulness for how many people were supporting Chick-fil-A. “We ramped up, beefed up, and prepared to be busy, but we’re even busier than expected. We’re overwhelmed with gratitude for the outpouring of support.”

DiChiara said he looked at the numbers of people supporting Facebook groups that are for and against Chick-fil-A. He found that there was a “vast difference” between the numbers. He said that Chick-fil-A does not ask customers about their personal beliefs. “Our goal is to serve every customer with honor, dignity, and respect.”

As we left two hours later, the lines were even longer than they were when we arrived! I blogged recently about the controversy surrounding Chick-fil-A.

Chick-fil-A’s president has been unapologetic in his stand for the family as God designed it. Dan Cathy said in one news report, “We are very much supportive of the family—the biblical definition of the family unit.”

Just as Dan Cathy said above, we have to look to the authority of God’s Word for our definition of marriage. And marriage was instituted in Genesis 1.

This national rally of support was not really a wake-up call to eat chicken of course, but a wake-up call to Christians to recognize we are in a spiritual war that is raging more than ever in this country. God’s people need to stand boldly on God’s Word. If you look at what has happened in England, you will see Christians are being persecuted in many ways for publicly professing their Christian worldview. This will happen more in this country if God’s people don’t get back to God’s Word and be the salt they should be.

*Using the spelling of chicken in Chick-fil-A’s well-known advertising campaign.