A Great Body of Work

Today my friend and colleague Dr. David Menton is celebrating his birthday. He is one of the most brilliant scientists I have ever known, and it has been a great privilege to have spoken alongside him at dozens of AiG conferences. He loves science—did you know that he was one of the editors of the prestigious Stedman’s Medical Dictionary and that his PhD in biology is from an Ivy League school? But most of all, he loves God’s Word.

Most of his excellent seminar talks have been put on video. Last year, AiG worked with the AFA Home School Channel to produce a series of creationist videos featuring Dr. Menton called Body of Evidence. To watch a large section of one of the videos he produced (it runs about 30 minutes), titled The Hearing Ear, go to this link.

Dr.Menton had an integral part in designing two of the latest, high-tech exhibits in our Creation Museum: one on homology and the other on “Lucy,” the so-called ape-woman. Here is a photo of Dr. Menton, exhibit designer Doug Henderson, and me in front of the ape vs. human homology exhibit on the day we opened this high-tech display that uses laser technology: 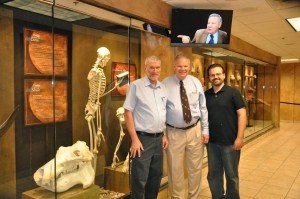 Here is a photo of his Lucy exhibit—using holographic technology—that opened a few weeks ago: 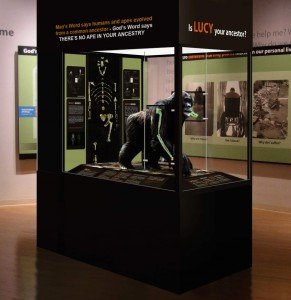 My brother Steve just gave Dr. Menton a gift: a book about the great reformer, Martin Luther. My guess is that he is spending a part of his birthday today reading the book. Even though he is in his 70s, he still loves to learn.

Happy birthday, Dr. Menton! He has had some health challenges recently, as has his wife Debbie, but we rejoice that he is still ministering here at AiG and the Creation Museum, not only through his striking exhibits but also through reaching thousands of young people and adults each year at his workshops and talks at the museum. 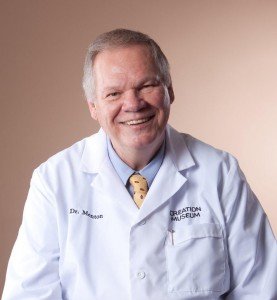 Previous Article Warning Next Article The Death of Darwinism