Recently, a post on the Atheistic Thoughts blog included a comment about me that is both blatantly untrue and highly defamatory. The author wrote the following:

For those who don’t know, Ken Ham has made comments that atheists should have rocks tied around their necks and be drowned.

Incredible! Well, here is some background to this wild accusation.

On March 21, I posted on Facebook about the atheist “Rally for Reason” in Washington, DC, which was offering programs for children during the rally. In regard to these atheists teaching children that there is no God, I quoted Christ’s words in Mark 9:42: “But whoever causes one of these little ones who believe in Me to stumble, it would be better for him if a millstone were hung around his neck, and he were thrown into the sea.” 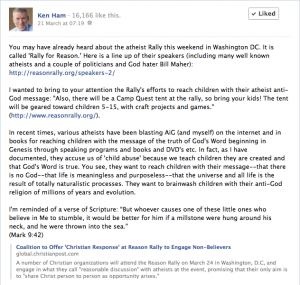 In this article posted on the LEO news blog, Fat Lip, Joe Sonka accused me of advocating that atheists be drowned, based on my quotation of this verse in Mark.

Now, this is not the first time I have quoted Christ’s words about those who cause children to stumble. In a 2009 article on the Answers in Genesis website, I quoted Matthew 18:6, which says basically the same thing as Mark 9:42, in regard to those who teach young children that there is no God.

If these atheists were to consider the context of these two verses, they would realize that I was not certainly advocating that atheists be drowned. Rather, I was indicating that those who teach our children that there is no God will be held accountable for it by God, and their punishment will be severe beyond this world. But here’s the key: these verses indicate that a fate of drowning would be better than experiencing that coming judgment.

John Gill, a theologian who lived in the 1700s, wrote about these verses. On Matthew 18:6, Gill writes, “Our Lord’s sense is, that it was much better for a man to endure the severest temporal punishment, rather than by offending, and evil treating any of his disciples, expose himself to everlasting destruction. The phrase of having a mill stone about the neck, I find, is sometimes used to denote anything very troublesome and burdensome.”

And on Mark 9:42, Gill writes, “Christ’s sense is, that such who give offence to any of his ministers or people, how mean soever they may appear, shall undergo the severest punishment.”

Now, the atheists’ accusation against us is obviously a ridiculous one. As we have seen many times, they certainly have no qualms about lying—after all, they hold to no absolute standards in a meaningless and purposeless universe. Of course, they are mainly performing in front of their own audience of fellow atheists. As you know, the “personal attack” strategy is pretty common for those who cannot defend their position.

Here are some final thoughts here about how secularists often attempt to denigrate the Bible—as well as the Christians who believe the Bible is the Word of God. Frequently, atheists wrongly apply what’s called a “wooden literalism” to the Bible, yet they don’t adhere to the same standard with their everyday language. For instance, an atheist (or anyone for that matter) might figuratively say, “It’s raining cats and dogs.” Now, we know it doesn’t mean that cats and dogs are literally falling from the sky; we know exactly what the phrase means. Also, we all use the words “sunrise” and “sunset” (even a newspaper will list the times of sunrise and sunset), but we know what those terms mean (from our visual perspective, the sun seems to rise and set). Yet when atheist mockers read the biblical description about the sun stopping in the sky (and from Joshua’s perspective, that is what happened), then they falsely accuse the Bible of being scientifically wrong.

The Bible often uses every-day language (“colloquial” terms), and it is important to understand the type of language being used. I.e., if it’s poetry, allegory, or apocalyptic language, or if it’s literal historical narrative. It’s obvious from the context in a passage when something is to be taken as an allegory or poetry in the Bible. For instance, when Hannah prayed, she mentioned the “pillars” of the earth, but in this prayer, she was talking about spiritual pillars, not real physical pillars that hold up the earth. Also, when Jesus said, “I am the door” or that He is “the shepherd” and “we are all like sheep,” we know exactly what these biblical statements mean from the passage’s context. It doesn’t mean that people are really like the sheep we see on farms today. Similarly, with the statements from Matthew 18 and Mark 9 about the millstone around one’s neck, they are warnings to people about how tragic it is for someone to lead a child astray—that future judgment by God will be severe on anyone who leads a child away from the Lord.

This is a reminder to pray for these very lost people and also to be reminded of their lying tactics. Also, it’s a reminder that they will not hesitate to lie in order to defame someone because of their intolerance of those who are Christians.