Adam and Eve—They Were Real People!

This week, AiG sent out the following news release about the latest edition of our popular and spectacular Answers magazine: 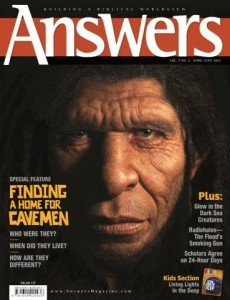 Evolutionists often call early humans “cavemen,” including what they describe as “primitive” people who lived in caves during the Ice Age. Increasingly, even some theologians are beginning to question whether or not the first humans, Adam and Eve, were real people, and argue instead that primitive cavemen are our actual ancestors.

In the just-released issue of the award-winning Answers magazine (a growing print and digital magazine produced by Answers in Genesis), various apologetics writers help unravel the mysteries of "cavemen" in a major feature section. It answers questions like: were they our primitive brutish ancestors?; did Adam and Eve really exist?

The Answers writers also help to counter the image depicted last year on the cover of the influential magazine Christianity Today, which featured a half-man/half-ape creature. CT explored whether there ever was a historical Adam. Many Bible scholars who have been influenced by evolutionary beliefs were cited by CT as doubting Adam’s historicity. For Answers magazine, the man on the cover is depicted with human features, including soulful, intelligent eyes.

Early humans are commonly classified as “cavemen.” They break down into several groups, scattered throughout Europe, the Middle East, Africa, and Asia. Dale Mason, publisher of Answers, stated that to call them “cavemen” is “somewhat misleading. Many of these humans simply found temporary shelter or buried their dead in caves, as archaeology reveals.”

Mason adds: “Nevertheless, the term caveman is often used as a catch-all for people who lived in an earlier era in human history—the Ice Age. Even some Christian theologians are arguing that cavemen were on the evolutionary line between ape-like ancestors and modern humans. Sadly, when early humans are depicted as animal-like primitives, the term ‘caveman’ carries some baggage: that they were less than human.”

In the new issue of Answers magazine, many authors (including those with PhD credentials) explore the often misunderstood and confusing topic of "cavemen." But they write about the subject at an easy-to-understand level. Dr. David Menton of AiG (PhD, biology, Brown University) observes: “All people, including so-called ‘cavemen,’ descended from Adam, through Noah’s family. They were very human, Homo sapiens, and thus were also in need of God’s grace.”

Dr. Menton continued: “According to the Bible in Genesis 4, the first humans made tools and musical instruments, and built cities. Ancient people were not primitives. Also, there are people today who live in caves, even in modern countries, but we don’t consider them less than human.”

Last year the June issue of Christianity Today spent several pages exploring the topic of whether or not the biblical Adam was an historical person. The brutish-looking caveman on the CT cover, plus many of the Bible scholars quoted in the issue, showed readers that there is general disbelief in the historicity of Adam among theologians.

In 2011, the Evangelical Press Association (EPA) honored Answers magazine with its General Award of Excellence, as selected from Christian periodicals. AiG, which began publishing the magazine only six years ago, was also commended in other categories related to the quality of writing and artwork included in Answers magazine. You can subscribe to Answers magazine in either print or digital edition.

Previous Article Reaching into Cuba Next Article News From the Olympics