My friend Bryce in Minnesota sent me an interesting T-shirt recently. Bryce runs marathons around the United States; he’s over the age of 50, but he still has some very good marathon times. An acquaintance of his in Belgium was the promoter for a race last month called “The Classic Tessenderlo” (named after the town in which it’s run). In this photo, I’m holding the shirt that—I’ve been told—was given to all the runners after the race. 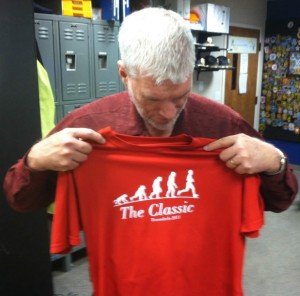 This is just more evidence of how evolutionary thinking permeates the Western world, even in a race that on the surface has nothing to do with the question of origins or biblical authority.

By the way, Bryce ran a very respectable time of 3:32:00 at the 2009 Memphis Marathon—at the age of 51! This enabled him to qualify for the famous Boston Marathon. Over the years, he’s raised over $100,000 for various charities. Thank you, Bryce, for that—and for the shirt.