Many AiG staff have had the opportunity to travel overseas recently for a variety of ministry reasons—mostly to proclaim the creation/gospel message in churches and in other venues. Last month it was Russia, and in a few days, I will be speaking in Malaysia.

A few weeks ago, Mark Looy, AiG’s CCO, traveled to the country of Jordan (on the border with Israel) with seven other religious leaders (not all were evangelicals). It was not only an opportunity for Mark to get to know this fascinating country (many events recorded in Scripture happened in what is today called Jordan), but Mark also got to know the other people who participated on a tour sponsored by the Jordan Tourism Bureau.

Just this past week, Mark reconnected with one of the tour participants. Cory Nickols is a writer and youth pastor based in Indiana. Mark invited him—and his father, who is a pastor—to meet up with him again. This time, they met at the Creation Museum (about a 3-hour drive for Cory). Here is a photo of Mark (far left) with Cory, and also Cory’s father and his wife. 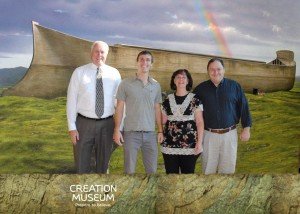 AiG has conducted tours of Israel and Jordan in the past, and we’re considering doing so again. To find out more about Jordan and traveling there, including to one of the “New Seven Wonders of the Ancient World,” Petra, go to this website.

Jordan is a Muslim country, yet the Jordanian people are known to be generally warm towards American Christians. Mark had the opportunity to visit three evangelical churches in northern Jordan. He found that even though Christians are a small minority in Jordan, they have some degree of religious liberty (that freedom is written into the constitution) compared to most Arab/Muslim countries (as long as the practice of their faith is not out in the open—although, you can even find a Christian bookstore in the capital city of Amman, and Christians are known to share their faith one-on-one with Muslims in restaurants and other places with few problems in recent years). 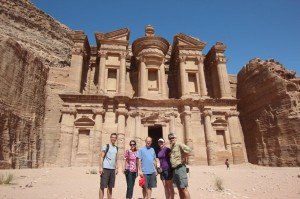 Cory is at the far left in this photo taken in front of the famous “Monastery” of Petra, Jordan.

The following is the email Mark received after Cory and his family toured the Creation Museum:

What an awesome time we had at the Creation Museum. It was incredible. Your team did a fantastic job with all the exhibits. We all loved it.

We were also so impressed with the impact you are making in so many people's lives! We started talking with one of your employees. He told me he and his future wife visited the Creation Museum about five years ago for a special tour before you opened the doors to the public. (They were visiting from California.) By the end of the tour, she (who was not a believer) received Christ!

They moved to the Cincinnati area later and are now both working for you! What a testimony of God working through your ministry!

Keep going! I can't wait to bring people from my church and area to visit!

I am grateful for people you who have said 'Yes' to the call of God!

Thank you also for the magazines and newsletters . . . very informative and well put together!

– Cory Nickols and parents, Indiana Also, here is a blog item that Cory wrote about his visit to the museum.