NewSong at the Creation Museum

We were privileged yesterday at the Creation Museum, when members of the singing group NewSong (currently on a radio tour) stopped in to visit. One of the lead vocalists mentioned he was very excited about the highly professional level of the exhibits and the evangelistic nature of the museum. Others in the group told me they had never seen anything quite like it and were looking forward to sharing the ministry of Answers in Genesis and the Creation Museum with people they meet on the road.

The Creation Museum has just recently developed a partnership with NewSong to promote the Creation Museum on their Winter Jam tour, which hosted over 580,000 attendees this past January through March (largest Christian tour in America during those months). I had the opportunity to give them a personal tour of the museum, and we also gave them a behind-the-scenes look into the upcoming Ark Encounter project. We praise God for Eddie Carswell, the founder of NewSong, for his uncompromising stand of the Word of God! See my photo taken with the group yesterday: 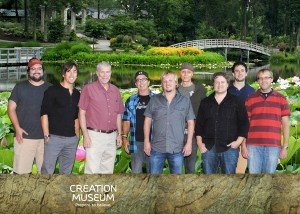 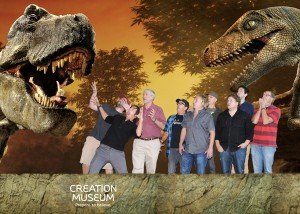 The lead article on the Answers in Genesis website today is another in a series we are producing to respond to the recent publicity surrounding the so called evolutionary ancestor of humans, sediba. The article is written by friend of Answers in Genesis, Dr. David A. DeWitt. Dr. DeWitt received his PhD in neuroscience from Case Western Reserve University. He is currently the chair of the Department of Biology and Chemistry and the director of the Center for Creation Studies at Liberty University. Dr. DeWitt is the author of Unraveling the Origins Controversy and has written a number of articles on the topic of human origins.

You can read the full article on www.answersingenesis.org.

Previous Article Rave Reviews Next Article “Newspeak” from the Assemblies of God?