Refreshing Article on the Ark Encounter

It is refreshing, amidst the onslaught of secularist propaganda articles full of falsehoods and personal attacks, to read an accurate article about the proposed Ark Encounter. This news article comes from the very popular WorldNetDaily news source. (It should be noted that the Kentucky tourism tax incentives for this project have yet to go through the normal processes and have not yet been officially approved.)

A company associated with the Christian apologetics ministry Answers in Genesis has announced plans to build a full-scale replica of Noah's ark in Grant County, Ky., southwest of Cincinnati.

The 500-foot ark will serve as the main attraction in a theme park to be constructed by Ark Encounter LLC, a partnership headed by AIG. . . ,

"We see increasingly in our nation a generation of kids who don't hear about the Bible anymore in the schools," said Ken Ham , founder of Answers in Genesis, the ministry that runs the Creation Museum in Petersburg, Ky, about 40 miles from the planned location of the ark.

"We believe that rebuilding Noah's ark out of wood according to the dimensions in the Bible would be a tremendous way to get people to think about the Bible and that particular story," Ham explained. . . .

Under an incentive program designed to bring more tourism revenue and jobs to the state, the Tourism Development Act, Kentucky is providing a rebate of 25 percent of tax revenues generated by the park for the first 10 years of operation.

Ham said the park plans to employ 900 people, and another 14,000 jobs will be created by hotels, restaurants and other businesses expected to spring up to cater to the massive number of visitors.

"People are making false claims" that the state is subsidizing the park, said Ham. He said Ky. Gov. Steve Beshear "looked very carefully at the plan to make sure there were no problems with church-state separation." . . .

"A lot of left-wing media and bloggers have reacted very negatively, writing a lot of false information. They only represent a minority of the people in this nation. The majority of people in this area and across the nation are supportive. The statistics show about 200 million people would want to come if the ark were rebuilt. Locally, the majority of people are really thrilled because it's family-friendly and it would bring hundreds of jobs to the region," said Ham.

"There is a growing anti-Christian element in this nation," Ham added. "This has opened people's eyes about how anti-Christian these people and some in the media have become." You can read the entire article on the WorldNetDaily website.

Below is a photograph of a group who attended Christmas Town at the Creation Museum on Friday evening. 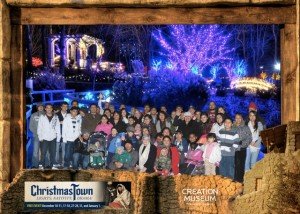