Speaking at a Creationist College

One of the most-asked questions I am asked at the Creation Museum and as I travel to speak at churches and conferences is the following: “Can you recommend Christian colleges that take a stand on a literal Genesis that I can consider for my children?”

As I have said before, there really are only a handful that take a very public stand, and today, I was privileged to be the chapel speaker to 3,000 students and faculty at Cedarville University. This beautiful modern campus is located in Ohio and only about 1.5 hours drive from the Creation Museum.

Cedarville University declares the following in its doctrinal statement:

On their website, they also state that they teach with a “creationist approach to scientific research and study.”

Praise the Lord for a college willing to insist on such a stand!

Cedarville University also offers, as far as we are aware, the only specialist undergraduate creationist geology program at a Christian college in the USA (most probably the world).  They began this course in 2009, and state the following on their website:

Cedarville University’s Board of Trustees recently approved the formation of the Bachelor of Science in geology degree, set to begin in fall 2009.

Faculty will equip students for lifelong scientific leadership in career fields such as hydrogeology, environmental geology, petroleum geology and numerous other areas of expertise.

The program will be unique in that no other Christian school, that holds to a literal six-day account of Genesis offers geology as a major for undergraduates. The course of study will be taught from both naturalistic and young-earth paradigms of earth history.

It is extremely important to develop critical thinking skills within the minds of young scientists,” describes Whitmore. “We believe that using a two-model approach of earth history will be advantageous to our students, since others are only taught a one-model, naturalistic approach. Geologists are important when it comes to thinking about earth history, especially within a biblical context.

Coursework will be rigorous and emphasize hands-on experience along with required field work. The geology major will include a wide range of liberal arts classes along with calculus, physics, chemistry, biology, physical geology, historical geology, mineralogy, petrology, structural geology, stratigraphy, sedimentology, geomorphology, invertebrate paleontology, and environmental geology among other upper-level areas of study. The major will prepare students for both graduate school and industry. After chapel, I had the special opportunity to have lunch with the president of Cedarville University (Dr. Bill Brown), and Professor John Whitmore, other faculty, and the geology students.  We had a great time of fellowship and question/answer time.  Here is a photograph taken of Professor John Whitmore and me (image provided by Scott Huck, Cedarville University photographer): 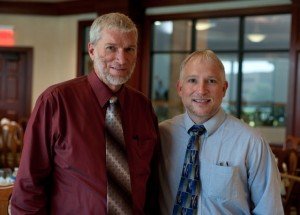 This is a photo of  the President, Dr. Bill Brown, and me taken after the chapel: 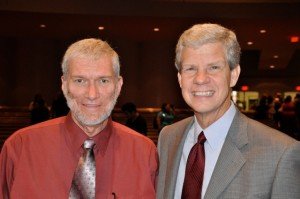 It was thrilling to speak to a packed auditorium of around 3,000: 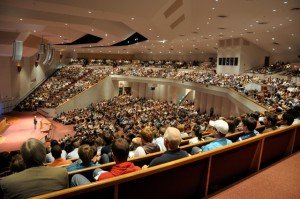 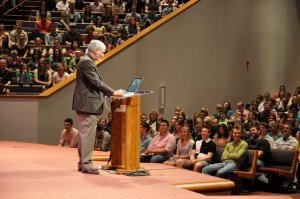 Thanks to the generosity of our publisher Master Books and its president (Tim Dudley), we are able to offer students at Christian colleges where I speak some of our major apologetics materials (e.g., The Answers Books and others) at a greatly reduced/subsidized price for the students.

We came up with a truckload of books, and took a completely empty truck home—the students took advantage of the super-special prices and bought it all!  Praise the Lord; these resources will equip these students to defend their faith, and help them be even more bold in their witnessing.

Here are two photographs of some of the students as they “vacuumed” the resources off the tables: 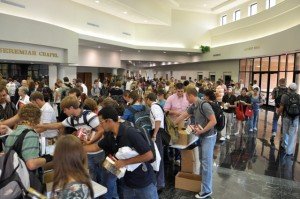 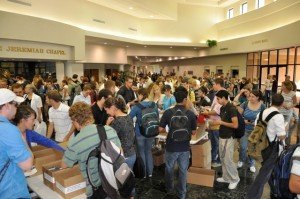 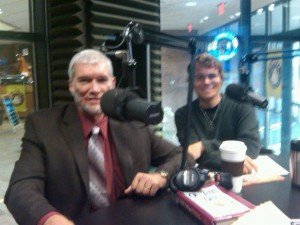 I met a student in the geology department who is from my home city of Brisbane in Australia.  He said he had asked a mutual friend to contact me some time ago to ask if there was a Christian college in the USA that offered a creationist geology program.  I knew of only Cedarville University.  He thanked me for passing on the information, as he is now a student in the geology program.

I also met two young ladies who told me they had watched the AiG video series that was filmed at Cedarville University many years ago.  Because Cedarville sponsored that DVD series (it is still one of our most popular video series), they checked out the college and now are attending as students.  I also heard of others who came to Cedarville because they saw their advertisements in our Answers magazine.  After the chapel service, many students lined up to talk with me for quite a long time.  I was overwhelmed with their positive comments.  It is to thrilling to meet these young people who have such a passion for the Lord and for this ministry.

(Deuteronomy 11:13-15)  And it shall come to pass, if you shall hearken diligently unto my commandments which I command you this day, to love the LORD your God, and to serve him with all your heart and with all your soul, That I will give you the rain of your land in his due season, the first rain and the latter rain, that you may gather in your corn, and your wine, and your oil.  And I will send grass in your fields for your cattle, that you may eat and be full.

Much is out of our control, but if our first love is the Lord Jesus Christ, our first interest is His book, our first work is His and then He will provide our livelihood. Thanks for stopping by and thanks for praying,