This past week, we had a few special Australian visitors at the Creation Museum. Mally and I were thrilled to host three of our very special friends we first met 36 years ago in Queensland, Australia. For my first teaching appointment, I was a science teacher at Dalby State High School (about 2.5 hours west of the coastal city of Brisbane). There we first met the Jiggens family who “adopted” us as a part of their own family. It was very exciting for us to have Buster Jiggens and his daughter Crystine, with her husband Kevin, spend a number of days with us. Kevin and Crystine live in Toowoomba, and Buster lives near Dalby.

Here is a photograph with Buster, me, Kevin, and Crystine: 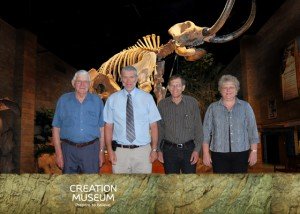 While here, they stocked up on AiG resources that aren’t readily available in Australia. Here they are in the museum’s Dragon Hall bookstore: 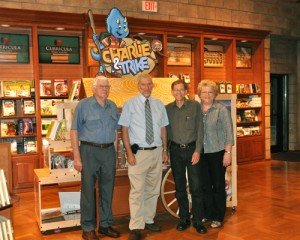 My brother Stephen and his wife Trish were thrilled to also host of one their special friends from Brisbane, Australia. Here is a photograph of Tania before she left to travel back home. 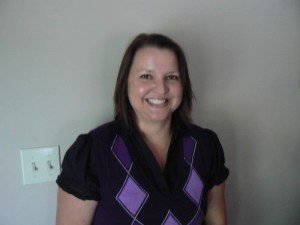 All of these Aussies just loved the Creation Museum and can’t wait to tell others in Australia that they need to come and visit.

This week we had more representatives of the international media here at the Creation Museum. For three days, a crew of four people from a Brazilian TV network were here to tour the museum and interview staff members for programs that will probably air in late November and early December in Brazil. Also, the programs will probably be picked up by countries in Africa where Portuguese is also spoken, and maybe even shown in Portugal. 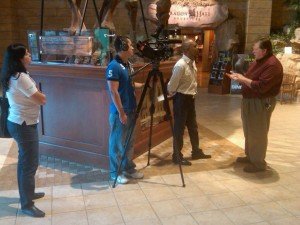 In the photo above, Jon Taylor of our museum—who lived in Brazil for many years and speaks Portuguese—is seen interviewed. We decided to have Jon do the interview in the museum’s main hall because Jon was the set designer for this large and beautiful room, which serves as a grand entrance to the museum. Here is what the hall looks like with a wide-angle lens: 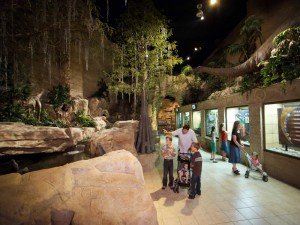 It’s great to have such a talented person like Jon be with us even though the museum opened more than three years ago, as there’s always something new to design here (e.g., new exhibits).

The Sao Paolo-based crew also spoke to Dr. Georgia Purdom and Dr. Jason Lisle of our staff. In recent times, we’ve had reporters here from Norway and Denmark. So three years later, there’s still a lot of global media interest in the museum.

Today if ye will hear His voice, harden not your heart

(Psalm 95:7-11) To day if you will hear his voice, Harden not your heart, as in the provocation, and as in the day of temptation in the wilderness: When your fathers tempted me, proved me, and saw my work. Forty years long was I grieved with this generation, and said, It is a people that do err in their heart, and they have not known my ways: Unto whom I swore in my wrath that they should not enter into my rest.

From the Bible, conscience, and others, the voice of the Lord Jesus Christ is heard; to refuse to respond is to err, be ignorant of Him, grieve, dare, and provoke Him. Thanks for stopping by and thanks for praying,

Previous Article Is It Really a Wonderful World? Next Article Labor Day Will Be Extra-Special at the Museum