On a particular blog post in the past, I commented that many of the so called “science” bloggers (such as PZ Myers from the University of Minnesota, Morris) are mostly expressing their anti-Christian rhetoric, engaging in name calling, and using vile and blasphemous language in attempt to shock their audiences.  They are intolerant of just about everyone except themselves, and arrogantly mock those who don’t agree with their atheistic religious beliefs.

It was fascinating yesterday to read  a commentary from the New York Times of all places, making these statements about these same “science” bloggers:

. . . but does everyone take for granted now that science sites are where graduate students, researchers, doctors and the “skeptical community” go not to interpret data or review experiments but to chip off one-liners, promote their books and jeer at smokers, fat people and churchgoers? And can anyone who still enjoys this class-inflected bloodsport tell me why it has to happen under the banner of science?

Hammering away at an ideology, substituting stridency for contemplation, pummeling its enemies in absentia: ScienceBlogs has become Fox News for the religion-baiting, peak-oil crowd. Though Myers and other science bloggers boast that they can be jerky in the service of anti-charlatanism, that’s not what’s bothersome about them. What’s bothersome is that the site is misleading. It’s not science by scientists, not even remotely; it’s science blogging by science bloggers. And science blogging, apparently, is a form of redundant and effortfully incendiary rhetoric that draws bad-faith moral authority from the word “science” and from occasional invocations of “peer-reviewed” thises and thats.

Under cover of intellectual rigor, the science bloggers — or many of the most visible ones, anyway — prosecute agendas so charged with bigotry that it doesn’t take a pun-happy French critic or a rapier-witted Cambridge atheist to call this whole ScienceBlogs enterprise what it is, or has become: class-war claptrap. It’s good to see that there are those in the secular world who are prepared to expose what these bloggers really are attempting to do in their so-called “science” blogs!

You can read the entire New York Times piece on their website.

On Wednesday evening, I spoke to around 4,200 people at Bellevue Baptist Church near Memphis, Tennessee.  This church was pastored for many years by one of the finest preachers in the country—the late Dr. Adrian Rogers (who was a good friend of our AiG ministry and allowed me to speak twice in his church).  The current pastor, Dr. Steve Gaines, is also totally supportive of AiG and wants to bring a major AiG conference to the Memphis area. He visited our Creation Museum two to three years ago. He urged the large Wednesday evening crowd to visit the museum (it’s about a seven-hour drive away), and to get behind the entire AiG ministry.

Here are some photographs from the evening: 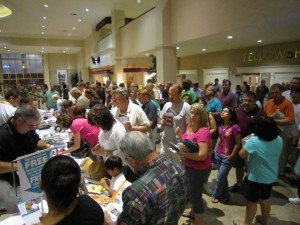 People crowding around the resource tables during the break

Praise the Lord for the openings we receive at AiG to spread the creation/gospel message throughout this and other nations.

Humble you, and to prove you, to know what was in your heart

(Deuteronomy 8:2)  And thou shall remember all the way which the LORD thy God led thee these forty years in the wilderness, to humble thee, and to prove thee, to know what was in your heart, whether you would keep his commandments, or not.

The Lord Jesus Christ wants us to know what is in our hearts & how our hearts can be strengthened to have Him as our only God with no rivals; so, He tries us. Thanks for stopping by and thanks for praying,