From time to time I like to highlight the speaking ministry of one of our excellent speakers.  This time it’s to mention the outreach that Buddy Davis has for young people. Here is some recent feedback on one of his meetings, where Buddy’s wife Kay helped out and their ministry had a phenomenal impact on some very special children:

We recently booked Buddy and Kay Davis for a series of events at our local church. There were six events, with two directed at children. We believe about 550 attendees were ministered to through the events.

Most of the children Buddy and Kay ministered to on the Monday afternoon are what the world calls ‘throw away’ children. These children have been traumatized and come to us feeling worthless. Buddy interacted with them in a genuine and friendly manner, which was not only a huge boost, but also necessary so that they could see the love of Christ.

Buddy was very clear about the need of each individual to have a personal relationship with Christ. The children listened attentively, more so than I have ever seen them at any other event.

We were blessed by their ministry and the ministry of Answers in Genesis in general. It is such a relief to find a place with speakers and a museum where we do not feel we need to spend hours undoing the damage that was done.

We brought some of our children and foster families to the Creation Museum last summer and not only had a great time, but had some deep discussions.

—C.B., Cambridge, OH To book Buddy for ministry to reach your young people, go to his speaker page and click on “Request an Event” at the bottom left of the page. 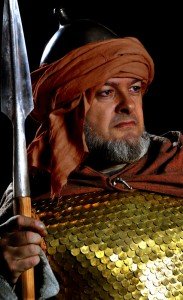 Here is a photograph of Deks Nordquist  who, dressed up as Hyam the Temple Guard , performed at the Creation Museum recently (as he did for the Bethlehem’s Blessing event this past Christmas) as part of our special Easter program.  We sold out the first show before Deks even arrived at 1:30, and the second show was sold out before the first one was over (or very shortly thereafter).  The presentations were held in the museum’s Special Effects Theater.  Once we build our multi-purpose room at the Creation Museum (we will be converting our warehouse over for this), we will be able to have many more people attend such special events.

Deks sent us this very encouraging report after this event:

The opportunity to serve my risen Savior by presenting “Hyam—the Temple Guard” yesterday was such a thrill . . . It is such a joy to see Christians celebrating the resurrection and responding to the gospel message.

Your kindness in allowing Christ to use me gave me such wonderful feelings that I must share two with you.

Again, my sincerest appreciation for the opportunity to proclaim my love for Jesus.

There is no man which sins not

(2Chronichles 6:36)  If they sin against you, (for there is no man which sins not,) and you be angry with them, and deliver them over before their enemies, and they carry them away captives unto a land far off or near;

The Lord Jesus Christ has concluded that all have sinned; man has no start with God unless he is willing to start where he must start:, his need of a Savior. Thanks for stopping by and thanks for praying,