Debate of the Ages

Dr. Lisle has written an extensive blog item on this informal debate (dubbed by the radio station as the “Debate of the Ages”), stating:

. . . I participated in an informal radio debate with old-earth proponent Hugh Ross. Hugh professes Christianity, but he simultaneously believes in the big bang (the most popular secular scenario for the origin of the universe) and the evolutionary timescale of billions of years for life on earth. Radio debates are always a bit frustrating because there is never enough time to say everything that needs to be said. I did not have the opportunity to refute all of Hugh’s claims due to time constraints, but the moderator was very fair, and I was able to hit the main issues, which are the following: I was also able to clarify some critical misconceptions promoted by Hugh:

Ministered to in Song

We have many special groups visiting the Creation Museum, but one group last month was extra-special – and that’s because they blessed us in a special way with their visit.

The Reflections Concert Choir is made up of homeschooled young people who live in the Dallas/Ft. Worth, Texas area—over 1,000 miles from our Creation Museum. On their March tour, they paid us a visit.  We thought we were just one stop on their tour, but it was more than that—as Candy Cooper (one of the group’s leaders) explained to us later:

On behalf of Reflections Concert Choir, I want to thank you both for arranging a time for our choir to sing at staff devotions and to tour your wonderful, AWESOME museum on March 16. God has truly blessed your organization, Answers in Genesis, by making provision for this inspiring and educational facility. 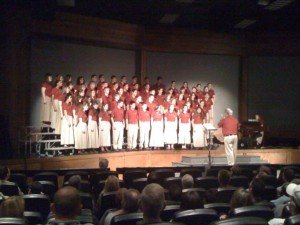 Our visit to the Creation Museum was the main focus of our Spring Choir Tour 2010. Our students and adults were quite impressed with the detail many of your exhibits displayed. My husband was personally affected by a particular exhibit. It was after the “Fall” exhibit [Genesis 3:15] and showed the destructive effects on the church and the culture when there is an abandonment of the Truth of Scripture. This thought-provoking scene should cause us all to be more vigilant in praying for the hearts and minds of all believers to stay steadfast in their faith and commitment to the Lord by remembering and LIVING the Truth found in His Word. We would be better witnesses for Christ and His Kingdom if we would not shrink back from proclaiming that truth to our families, our friends, our co-workers, community and world.

Another favorite activity for our group was the Planetarium, as I heard numerous comments on just how much everyone learned through your multi media presentation there. Only a Creator God could design such a complex and magnificent universe as ours.

Thank you once again for making this opportunity possible for Reflections Concert Choir. You did a wonderful job handling the needs of our group. If we are ever near the museum on future choir tours, we will definitely be back for a visit!

Sincerely, Candy Cooper Group Tour Coordinator 2010—for “Reflections Concert Choir”; www.reflectionschoir.com Find out more about this unique choir (I was out of town when they sang to our staff and toured the museum, but I heard great reports about their singing).

There is no man which sinneth not

(2Ch 6:36)  If they sin against thee, (for there is no man which sinneth not,) and thou be angry with them, and deliver them over before their enemies, and they carry them away captives unto a land far off or near;

The Lord Jesus Christ has concluded that all have sinned, man has no start with God unless he is willing to start where he must start, his need of a Savior. Thanks for stopping by and thanks for praying,