One of the more unusual speaking engagements I’ve had recently was the opportunity this past week to speak to the weekly Bible study of the Cincinnati Bengals professional football team. Our AiG headquarters and Creation Museum are less than 20 miles away from the stadium where the Bengals play, and because a chaplain for the team (a former professional football player himself) is such a strong booster of our ministry, I was asked to speak to several of the team members (and some spouses were also there).

The Bengals, by the way, are having a very good season—they are even undefeated in their division and have beaten the Super Bowl champions (the Pittsburgh Steelers) twice this year—including about 24 hours before I spoke to team members.

My message was on this theme: If there is a God, why is there so much suffering and death in this world? I particularly related this question to the recent massacre at Ft. Hood in Texas. They were a very attentive bunch—even though many of them must have still been very tired and bruised up from the game the day before. 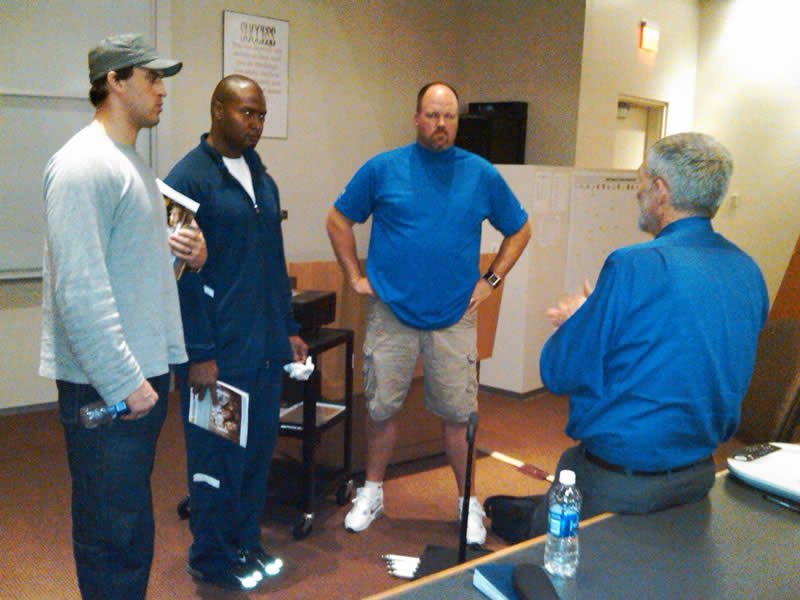 In the photo, you can see the (very tall) Bengals tight ends Ben Utecht (he has his own music ministry—go to his Facebook page for more info), Reggie Kelly, and then Ken Moyer, our host and Bengals’ chaplain. Ken was an offensive lineman for the Bengals for many years and also played for the Philadelphia Eagles—until he hurt his shoulder. Ken is such an avid Bible student himself, including in the area of apologetics, that he is trying to disciple as many players as possible—especially some of the young Christians on the team (including some well-known names, which Ken prefers to keep low profile for the moment; Ken had no problem, though, with sharing the attached photo of Ben, Reggie, Ken Moyer, and me as we talked after the Bible study). These guys are BIG!

Ben, by the way, played on the Super Bowl champion Indianapolis Colts a few years ago.

I have to admit: I am finally beginning to understand American football, including the concept of the “first down”!

“We Had Just Been with Family”

Here is one of the many encouraging feedback items we received recently:

We are Lifetime Charter Members and are so pleased the Lord led us to this decision. When we decided, I do not think we knew what an awesome endeavor we had invested in. When we visited the museum for the first time in May, 2006 (behind the scenes tour), we could tell immediately what an excellent place this was going to be. When leaving the museum that very first time, I had such a sense, a “feeling” (if I may use that word, even though we don’t base our lives on feelings), that we had just been with family. It was a wonderful “experience,” especially knowing that most everyone there, at that time, were believers in Jesus Christ.

We visited the museum again in June 2007 and were able to see the more completed museum. Again, we were impressed with the details put into EVERY sculpture, video, scene, animal, description, etc. Our most recent visit was on August 7 & 8. It has been exciting to see the additions each time we have come—you have had to add additional parking and restrooms! What a blessing! Our five children (ages 2–9) especially love the petting zoo, so much so we came back the second day to spend extra time there. And to our pleasant surprise, they wanted to see “Men in White” a second time. Even our two year old sat quietly through the entire presentation, waiting for her chair to rumble again.

My husband has been witnessing on Facebook in regards to the age of the earth. He was anxious to get into your bookstore to find just the right video to help him grow in his scientific knowledge. He apparently found the right one (Dating Fossils and Rocks) because he watched the entire video the night we got home, woke me up, and told me he felt like a scientist now. . . . We cannot say enough about what an outstanding, God-honoring museum you have built. May you see many souls saved because of it! To God be the Glory!

I called him alone

(Isaiah 51:2) Look unto Abraham your father, and unto Sarah that bare you: for I called him alone, and blessed him, and increased him.

The Lord Jesus Christ calls each one of us alone (even apart from our dear spouses) to have our one-on-one, vital meeting with Him each day in our quiet times. Thanks for stopping by and thanks for praying, Ken