Answers in Genesis is thrilled once again to have been asked to participate in an outreach to the largest convention of educators in the world, at the NEA (National Education Association) Convention in San Diego this week. Here is a press release AiG has just sent out:

Attendees at this year’s annual meeting of the National Education Association in San Diego this week will be the unlikely recipients of thousands of dollars worth of Bibles and creationist materials, offered by members of the Creation Science Educators Caucus. This caucus endeavors to help public school teachers better understand the massive problems with the evolutionary belief system that is taught as fact in most science classrooms.

The NEA meets each year to discuss legislation and policy within the assembly. The group supports a distinctly liberal perspective on many issues. For the past 14 years, the NEA has allowed a consortium of creation proponents to have a presence at the convention, and engage in friendly dialogue with the attendees. As part of the outreach by the Creation Science Educators Caucus, Answers in Genesis has donated thousands of free DVDs and books.

“We are pleased to be invited by the Caucus to join this unique outreach to the nation’s leading educators,” said Ken Ham, Founder and President of Answers in Genesis and the highly acclaimed Creation Museum. “We are honored to be able to provide materials and volunteers for this educational endeavor.”

In addition to the usual Answers in Genesis creation DVDs and literature that are being distributed by the thousands at no charge, volunteers from the ministry and other creationist colleagues have flown to San Diego at their own expense to engage convention attendees in conversation, hoping to introduce NEA members not only to the faults in evolutionary thought, but also to faith in Christ. In fact, a large banner at the Caucus booth states: “For by Jesus Christ all things were created.”

“Our goal this week is not to create controversy or hold a revival. We simply want to balance the representation of views presented at the conference,” said Ham. “I hope that participants will take the time to watch a DVD or read a book that the Caucus is handing out, and that they will see how the Bible is confirmed by observational science. Also, we always welcome a friendly debate with evolutionists!”

In the photo, you can see convention delegates engaging AiG staff and other volunteers (you can spot Dan Breeding, Dr. Jobe Martin, Dr. Cherian John, and Mike Riddle) in conversation. 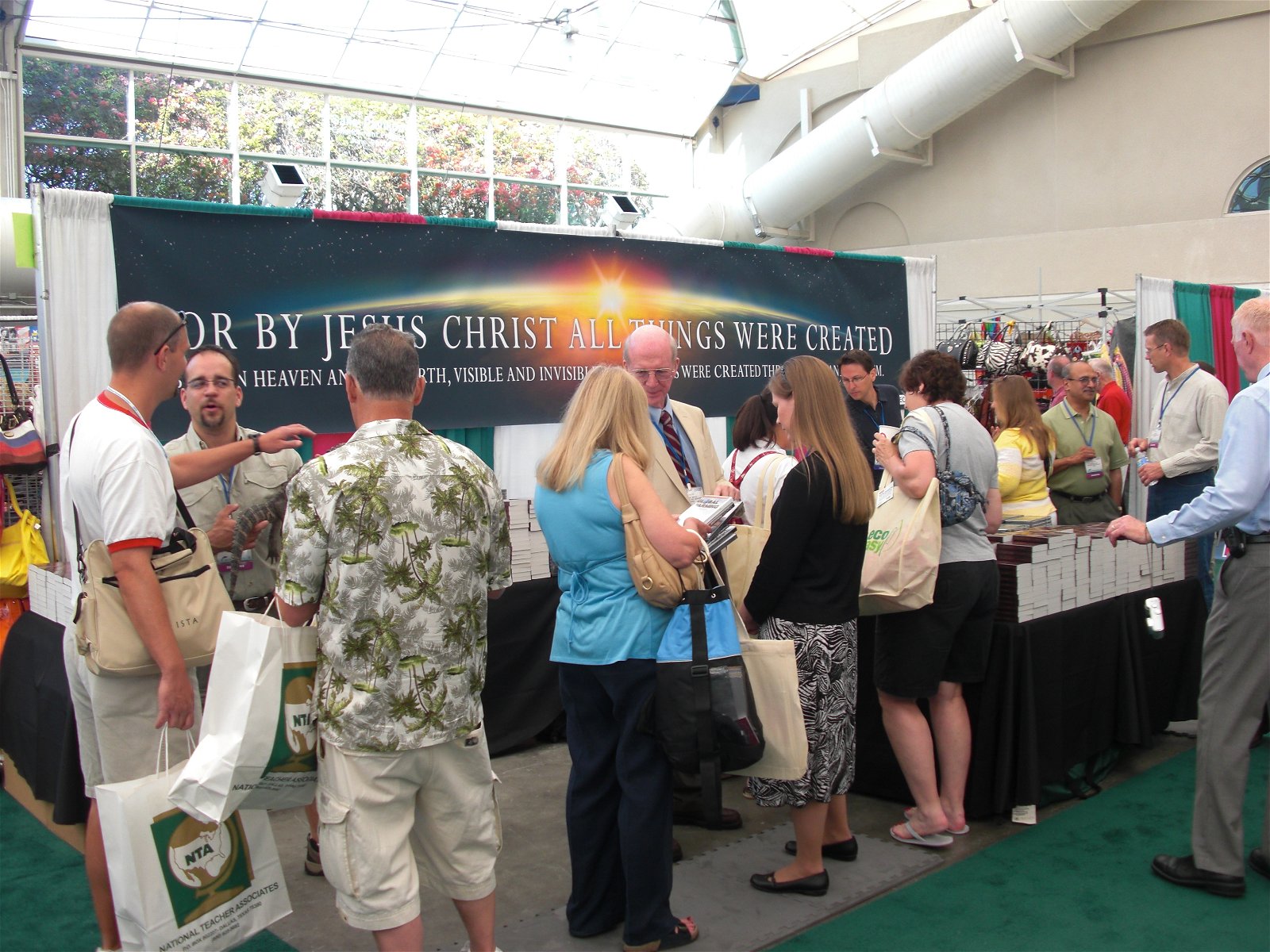 There’s a Mastodon in the Main Hall

The cast of the mastodon skeleton I have talked about in a previous blog is now in its permanent location in the Main Hall of the Creation Museum. Here are a series of photographs showing AiG staff assembling this impressive creature, and then one of the finished mastodon in its permanent home: 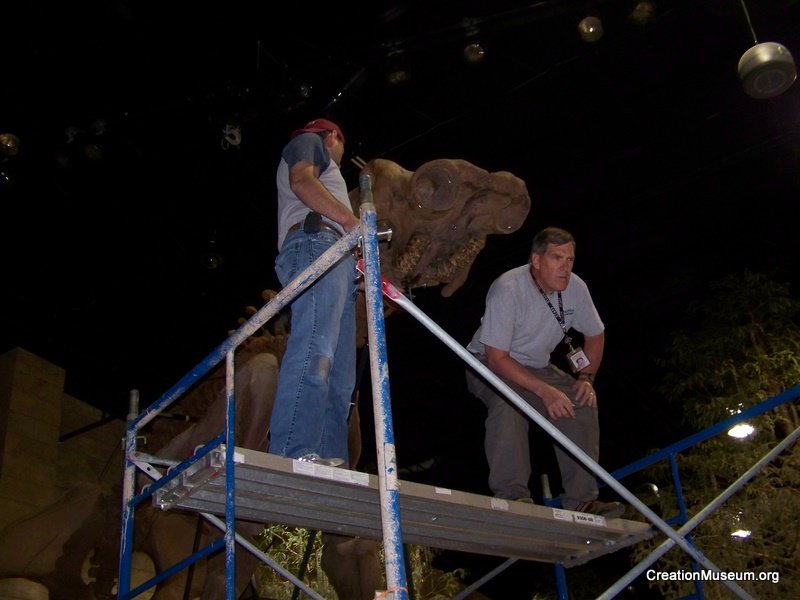 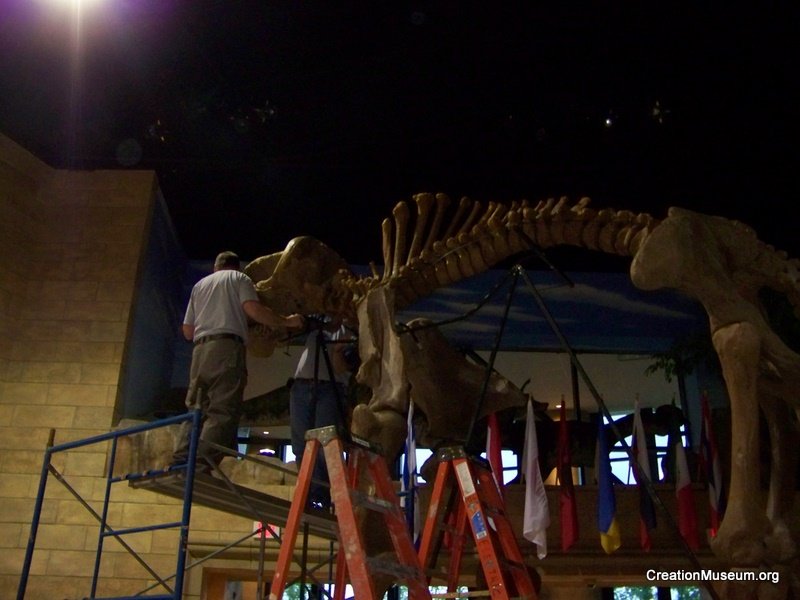 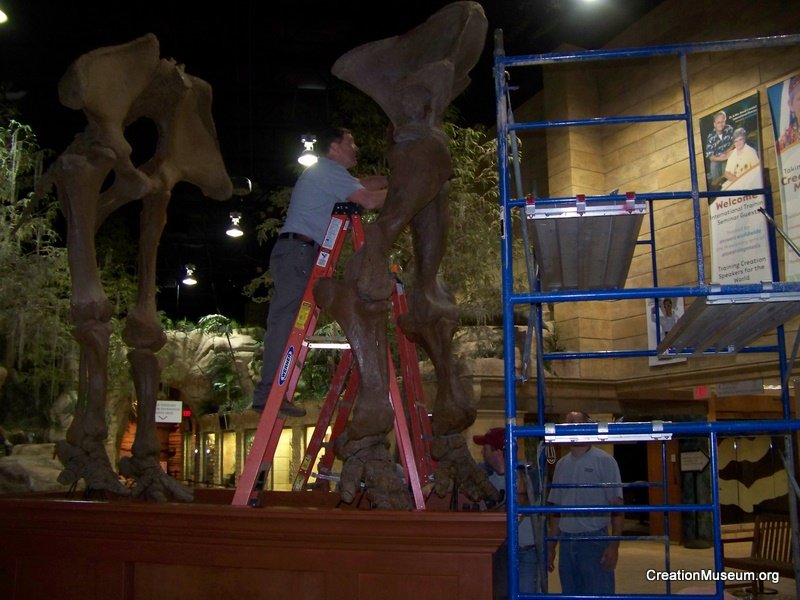 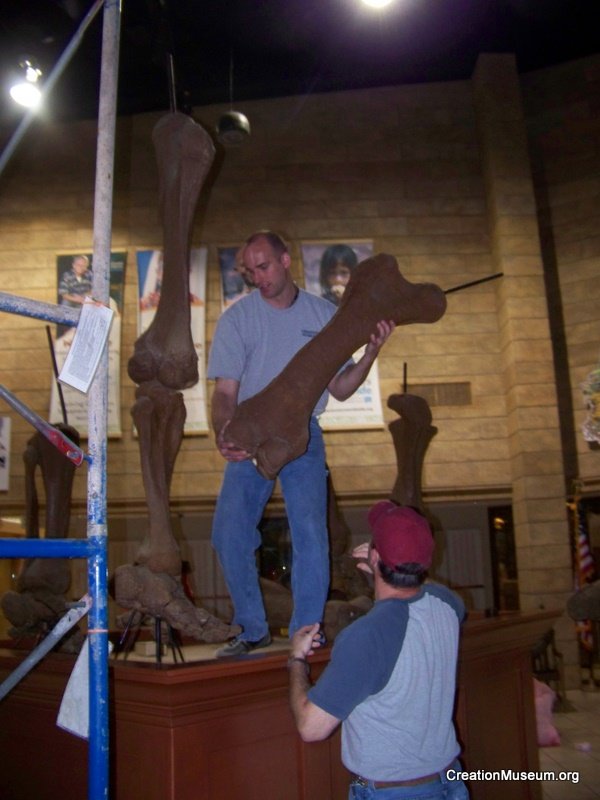 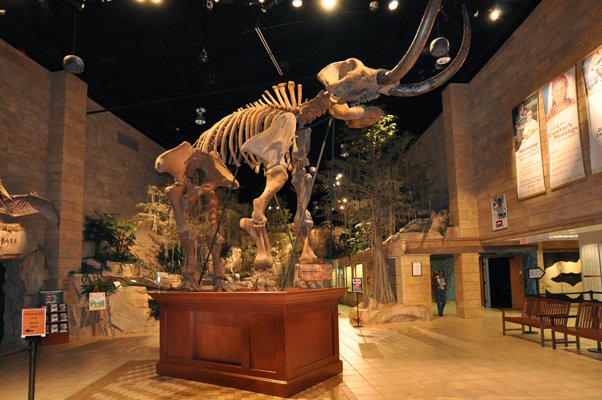 (Exodus 17:4) And Moses cried unto the Lord, saying, What shall I do unto this people? they be almost ready to stone me.

We turn around corners of life and face surprising new problems, but we still have our familiar, trustworthy helper for each challenge, the Lord Jesus Christ.

Previous Article Which God Are We Talking About? Next Article A Very Different Evening at the Creation Museum