Sorry to have to tell you this, but according to a Reuters news report on Yahoo.com , you are more related to Australians than you ever realized—this article claims we are more similar to kangaroos than secular scientists ever thought possible! Now how is that for disturbing news? The report claims:

Australia's kangaroos are genetically similar to humans and may have first evolved in China, Australian researchers said Tuesday. Scientists said they had for the first time mapped the genetic code of the Australian marsupials and found much of it was similar to the genome for humans, the government-backed Centre of Excellence for Kangaroo Genomics said. "There are a few differences, we have a few more of this, a few less of that, but they are the same genes and a lot of them are in the same order," centre Director Jenny Graves told reporters in Melbourne. “We thought they'd be completely scrambled, but they're not. There is great chunks of the human genome which is sitting right there in the kangaroo genome,”

Well, I hope that puts some bounce in your step for today! Here is the entire article: news.yahoo.com/s/nm/20081118/od_uk_nm/oukoe_uk_australia_kangaroos

It is great to read reviews of ANSWERS magazine like this one from other ministries:

Wow! I just finished Answers, special focus: planet earth. All superlatives apply. As a layman, my eyes would often glaze over when reading about global warming or the geologic column. But after working my way through the clearly written articles in this issue, the big picture is coming into focus. The brain fog is drifting away.

You can read the entire item at: cetministries.wordpress.com/2008/11/08/october-december-2008-answers-magazine-review

Another new addition at the Creation Museum Petting Zoo—a donation to the zoo of Norman, the miniature bull! Here is a photo of Norman as Gomer our pet camel looks on! 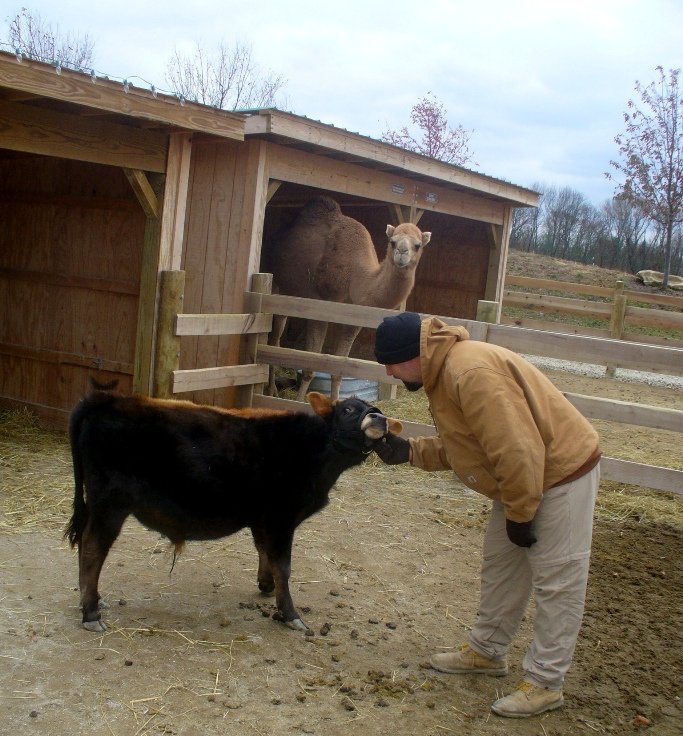 With the below freezing weather we’ve been having in the mid-West, one could think I was going to Florida this weekend for the weather—but I will be speaking at Calvary Chapel, Kendall (Miami) Saturday night and Sunday am and pm. The details are on our AiG website event calendar. I will be giving the same basic talk Saturday night and at the services Sunday morning—but two totally different talks Sunday night.

Run for refuge to lay hold

(Hebrews 6:18) That by two immutable things, in which it was impossible for God to lie, we might have a strong consolation, who have fled for refuge to lay hold upon the hope set before us: Only after the spotlight of the Law of God shined on us to reveal our sins did we run for refuge to lay hold on the hope of sins forgiven thru the blood of the Lord. Thanks for stopping by and thanks for praying Ken