The Adventures of Beowulf, dating back to AD 1100, are of the great Scandinavian warrior of the sixth century. Well, now Beowulf has invaded the Dragon Hall Bookstore at the Creation Museum. With the new dragon in place, Beowulf was recently added (see photograph). 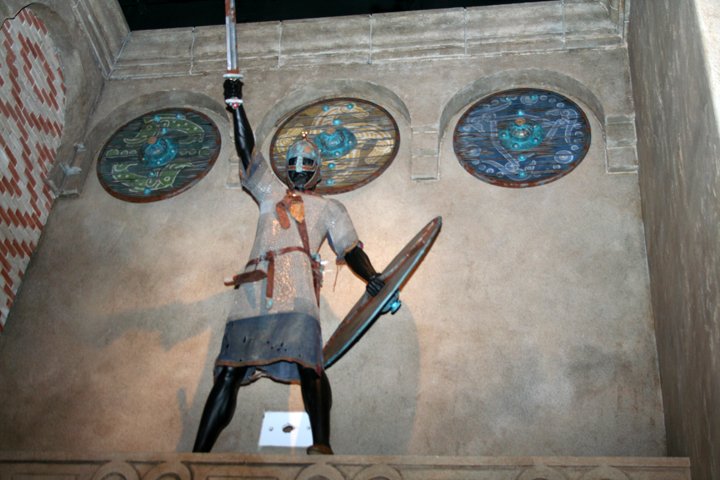 The Dragon Hall Bookstore is not just a place where one can purchase resources (books, DVDs, etc), but is an exhibit in itself!

Yesterday I had a call from CNN radio to do an interview about the Creation Museum because an Associated Press article featured the Museum’s first year of operation.

The museum exhibits are taken from the Old Testament, but the special effects are pure Hollywood: a state-of-the-art planetarium, animatronics and a massive model of Noah's Ark, all intended to explain the origins of the universe from a biblical viewpoint.

The Creation Museum, which teaches life's beginnings through a literal interpretation of the Bible, is claiming attendance figures that would make it an unexpectedly strong draw less than a year and a half after it debuted. More than a half-million people have toured the Kentucky attraction since its May 2007 opening, museum officials said. You can read the entire article at: A year later, Creation Museum claiming big crowds in Kentucky.

The article also appeared (in its original or adapted form) in a number of other news sources including: MSNBC (on the front page when it appeared), WORLD magazine, local WLWT-TV . . . plus in several leading newspapers across America.

“Out of His mouth cometh”

(Proverbs 2:6) For the LORD giveth wisdom: out of his mouth cometh knowledge and understanding.

Wisdom, knowledge, and understanding are given to those who draw so close to the Lord Jesus Christ that, like Adam, they receive them from the Lord’s mouth. Thanks for stopping by and thanks for praying,