Even a Nine Year Old Gets It

In the United Kingdom, the majority of clergy (most of whom have been trained in seminary or something similar), and the majority of other church leaders, do not get how important it is to stand on the authority of the Word beginning in Genesis—but a nine year old boy who loves God’s Word does get it!

I want to introduce you to Fraser. From England, he came with his father to the conference I spoke at in Westminster chapel in London. He sat on the front row and listened intently to everything I said. He came up to talk to me a couple of times—and asked a couple of very in-depth questions. The faith of this young person puts the majority of church leaders (clergy) in the U.K. to shame. God is raising up young men like this to make a stand for the truth of His Word in the U.K.

We took some photos of Fraser with me and emailed them to him. His mother wrote and said:

I just wanted to thank you so much for the photos. My son Fraser and my husband have just returned home today, and for both of them the highlight of their trip was the conference and for Fraser meeting Ken Ham. My son is so captivated by the whole creation message and even now is watching a sermon he bought while at conference. Bless you so much for taking the time with Fraser, and please pass on our thanks to Ken Ham also. Not many men of God take much time for children so your heart has been outstanding and glorifies God.

Fraser gets it! Let’s pray the church leaders in the U.K. start to get it also!

Pray for Fraser that he will continue to grow in the Lord as he studies His Word. 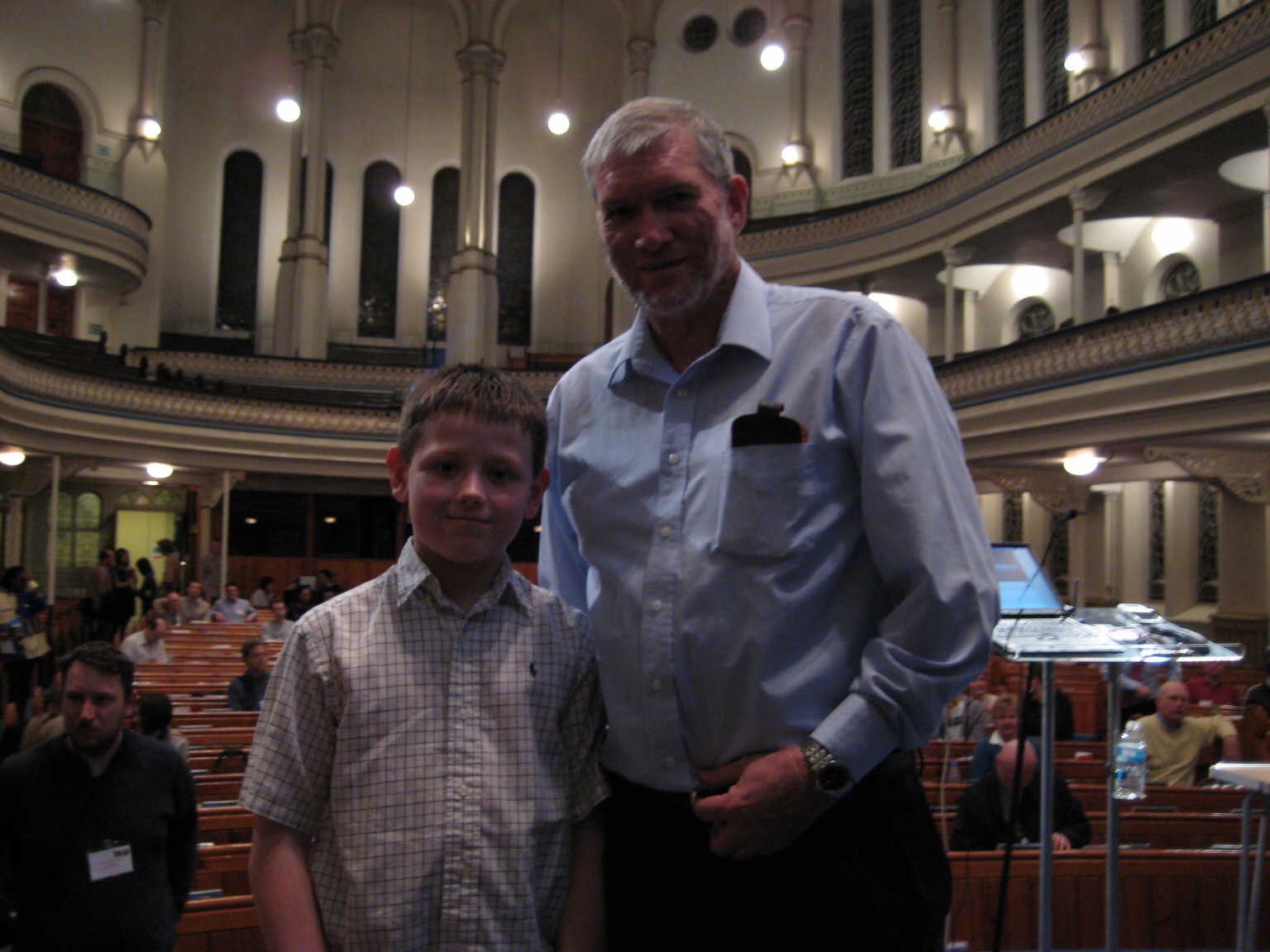 A “CHANCE” MEETING ON THE GATWICK EXPRESS

While in London, Mike Zovath and I stayed in Gatwick (near the airport) and went by train (the Gatwick Express) into London each day for the creation conference at Westminster Chapel. On Saturday, we got on the train and a man came in and sat in the same section as us.

He then looked at me and said, “creation?”

He said, “Yes—I use your website all the time.”

We found out he was from Ghana and was returning to England after going to his homeland to bury his mother. He talked with us the entire 30 minutes of the train ride. As he spoke, he said something like, “I tell people you can’t pick and choose what you believe in the Bible. If you do that, how can you believe any of it.”

I told him he could give my talks! He smiled and said he understood these things from reading the AiG website. He also said he knew of others that were blessed by AiG’s website. What an encouragement. He wanted a photo of the two of us, so Mike took the photo and we emailed it to him. I have included the photo of Paul and me taken on the Gatwick Express. 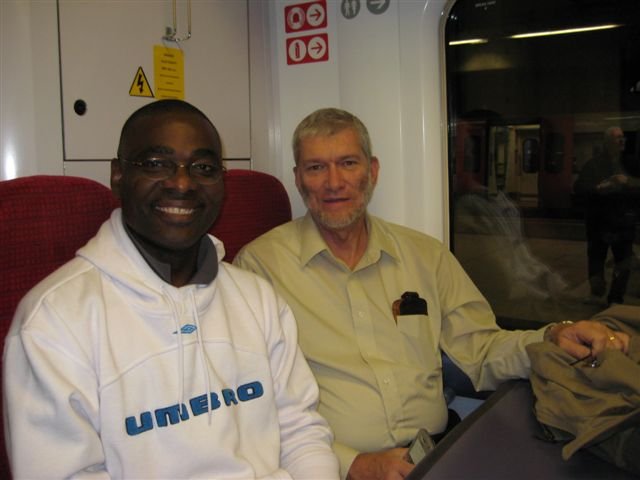 At 4 a.m. Tuesday morning (it is called JET LAG) and back in the U.S., I was working on my computer catching up on emails, when Paul Taylor from the AiG U.K. office sent me the following testimony that thrilled my heart (and angels rejoice in heaven) as this is what the AiG ministry is all about:

Gill and Mark, who organised the meeting in Grimsby, have emailed me to say that a couple they have been witnessing to for some time were both saved on Tuesday evening after the meeting. The husband of the couple—called Simon—said that your talk dispelled the last couple of remaining obstacles that he had. Praise the Lord!

We met Gill and Mark in a seafood restaurant before the meeting—and I remember them telling me about this couple they were praying for in regard to their salvation and that they would be attending the meeting. Mark told me that Grimsby had one of the lowest church attendance percentages of any community in England. It was a hard area spiritually—but still over 250 attended the meeting, and there was a phenomenal response to the resources (there was an obvious hunger for information). Praise the Lord for the way He is using this ministry to bring souls to salvation.

I had the privilege of chatting briefly with Ken at the Firm Foundations Conference in Wales the other weekend. I first discovered AiG via their website having previously been a member of the Creation Science Movement in the U.K.

The professionalism of the AiG website and the breadth of the answers found there is excellent. I hope to visit the Creation Museum in the near future. Visitors to the U.K. may be interested to know that the Creation Science Movement have a small creation museum in Portsmouth. It’s called Genesis Expo and is on the Portsmouth Hard by [the ship] HMS Warrior. Entrance is free and there is a bookshop with resources. Details on their website: www.csm.org.uk and then “expo.” Ken—thank you for coming to the U.K., and I hope you weren’t too delayed at Gatwick by the snow. Regretably it is safety policy to stop takeoffs and landings when it is snowing heavily and settling as it was on Sunday.”